Blurring the line between abortion and infanticide
D & X. the most impious form of terminating tots
Dilation and evacuation, such a problem for the doctors
By the second trimester infantile tissues are tough
Making adequate dismemberment and removal difficult
But the dilation and extraction procedure eases the grisly task
Children gruesomely murdered before they leave the womb
This full term abortion is obvious baby butchery

Tell me mother, can you feel the child kick?
Your unwanted pregnancy soon to be hacked away
Umbilical cord cut, but a tiny navel never tied
Another dead papoose for the pro-choice side
It's immortal and obvious butchery

Pulling the wee babes legs into the birth canal
Entire body delivered except for above the neck
Cervix won't dilate, the head cannot pass
Blunt surgical scissors stab the cranial base A suction catheter is inserted into the hole
The premature brains are vacuumed out
As the tiny, soft infant skull collapses
The disgusting evacuation is now complete

Tell me mother, can you feel the child kick?
Your unwanted pregnancy soon to be hacked tied
Another dead papoose for the pro-choice side
It's immortal and obvious butchery

Infanticide legally done by detestable physicians
The Freedom of Choice Act soaked in baby's blood
Instead of adoption a massacre eventuates
Another generation of children they exterminate
Abortionist guided by an ultrasound screen
Using forceps to tear the babe from the womb
Eight months with child, now the cuntbag chooses to kill
Her offspring's brains sucked, and bodily bisected between her thighs 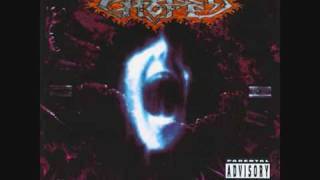