Back In Judy's Jungle Lyrics

Back In Judy's Jungle Lyrics


These are your orders, seems like it's do it or die
So please read them closely
When you've learnt them be sure that you eat them up
They're specially flavoured with burgundy, Tizer and rye
Twelve sheets of foolscap, don't ask me why.
We hit the jungle just as it starts to monsoon
Our maps showed no rainfall
All the boys were depressed by this circumstance
Trust in the weather to bless agricultural man
Who gives birth to more farmhands, don't ask me why.
Fifteen was chosen because he was dumb
Seven because he was blind
I got the job because I was so mean
While somehow appearing so kind
Drifting about through the cauliflower trees
With a cauliflower ear for the birds
The Squadron assembled what senses they had And this is the sound that they heard
Back at headquarters khaki decisions are made
File under 'Futile', that should give you its main point of reference
It's all so confusing, what with pythons and then deadly flies
But to them it's a picnic, don't ask me why.
Thirteen was chosen because of his luck
Eleven because of his feet
One got signed up for exceptional pluck
Another because he was mute
Roaming about through the gelatin swamps
With a gelatin eye on the stripes
The Squadron assembled what senses they had
And this is the sound that they heard
Back in Blighty there was you
There were milkmen every morning
But/f*ck these endless shiny trees
Never used to be that way. 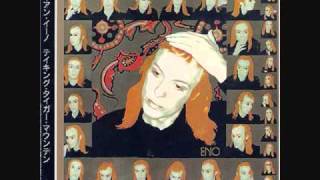 check amazon for Back In Judy's Jungle mp3 download
browse other artists under B:B2B3B4B5B6B7B8B9B10B11B12
Songwriter(s): Brian Eno
Record Label(s): Digital Remaster 2004 The copyright in this sound recording is owned by Virgin Records Ltd
Official lyrics by