Whenever ya hear the piece of the track, peace to the black
peeps on the streets with the beats in the jeeps
Comin back in '94 with the raw that's against the law
It's the G-O-D, my delivery is C-O-D
Word is bond and bond is life
We got it goin on tonight, don't nobody wanna fight
they wanna see a tight show where some brothers might go for broke
Utilisin the effects of the smoke

More cash to smash to make the blunt last
Fill it with hash til it pass, don't even ask in the Flat'
Put ass in a grip, flags is half-mast
Somebody must've passed, we're makin your ass drip into the stands
Fold my cash at last, my task to teach the class
and receive somethin more than brass is a blast
Make a brother work hard, long and fast......

Dreadlock, I send a rock from my block
Clock wax like crack, samplin from old stacks
That's where the soul's at, in this whole rap universe
We kick the funky tunes with a burst
Sun, moon and star, *?Sunbumba?* Jamar
To get me in the flow, now I'm read' to go Set to show, everybody in the party that we're nice
wit out sippin on Bacardi and ice

The southpaw, ask your ma, I be the shinin star
No matter who you are, no matter who you are
I'll rape the tape, drop along in interstate
wit weight, wipe the slate and, mob the gate
And by fakin I'll avoid the court date, no legal aid
Everything's paid, while courts are tyraid
If the money ain't made, talkin millions
but spendin penny's and gettin cheap shoes from Kenny's

I push the Cadillac DeVille and still we real
I drive a garbage truck and not give a ........
I need to earn a buck four-a-year
I'm thru with buyin wild gear
Just somethin I can wear, somethin fly when I'm there

Well now we're here to take the gold and the cash 'fore the bill fold
I told their ass to chill and they're still cold
Frozen cos they're not amongst the chosen one
Sun shines like a beacon, similar to Howard Speake

As I receive the mic for the last time, I clear up your past crime
All felonies can go, as long as you know
Brand Nubian will stand, without the use of a band
We always work with a plan 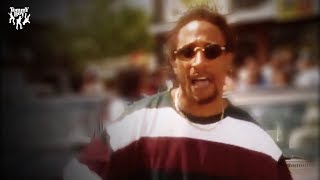 check amazon for Word Is Bond mp3 download
browse other artists under B:B2B3B4B5B6B7B8B9B10B11
Songwriter(s): Ferrone, Mcintyre, Gorrie, Dechalus, Ball, Duncan, Murphy
Record Label(s): 1994 Elektra Entertainment, a division of Warner Communications Inc for the United States and WEA International Inc for the world outside of the Uni
Official lyrics by