[J-Zone: using a "Screwed" voice]
Muh'f*cker this ain't Hip-Hop...
This is Hog Hop, bitch!
Yo Celph, drop that beat man

[Chorus: J-Zone]
Never see us spendin on a bitch, these hogs is rich Paw, I know you feel me wodie
We gettin so much mail dump a hater-ass botch in the ditch
Slap slap, chop chop on a bitch
Smob in ya whip, smob down the strip
But most of all these hogs will smob on a bitch
We won't stop hoggin nooooo
We won't stop smobbin hoeeee

[Celph Titled:]
I'm a straight A hog, you didn't know I was smart man?
f*ck a two-step, we in the club doin the Bartman
Bitch gave me lip, I guess I shoulda shot her (yeah)
Cause I'm a pimp which stands for, p*ssy Is My Product
Chickenheads is runnin they words just like Thanksgiving
Cause I can't WAIT to be the first to cut the bird
f*ck what you heard, this is Boss Hog domination
We'll dominate the charts and dominate a dominatrix
f*ck what a bitch think (f*ck her) f*ck it a bitch can sing (f*ck 'em)
Just go down on me so I can watch your lips sync (holla)
To the base of my shaft, put your face on my shaft
Boss Hog, the new faces of rap
We can be friends with benefits (pssht)
But bitch I'm only your friend when I'm receivin benefits
So suck dick and skedaddle bitch (uh) from the East to the South bitch
And yeah I'll shoot babies when I skeetin in your mouth bitch

[J-Zone:]
Only two places (uh) I ain't been befo'
Inside of a UFO and in love with a hoe
Last year I took a bitch on a date and I was treatin
Then I seen Hailey's Comet pass by when we was eatin
Meanin if you want me, to buy yo' beers
Ya lil' bitch, you gonna wait another ninety-six years
Then I'll be full of Viagra, beat yo' ass with my cane
Drinkin Geritol and gin and gettin head on the train
The Hogs in the house (uh) Cuban and the Captain
Don't touch my chinchilla, get my scrilla
Celph made this beat (uh) on stereo mode
Nigga you thought a 808 was an area code?
Ve-hog-ular homicide hoes, straight from out of my Vogues
Give a hoe a clothesline if she ask me for clothes
Not a thug, in my trunk I don't have no clip
Just a basketball, a jack, and a loudmouth... bitch! 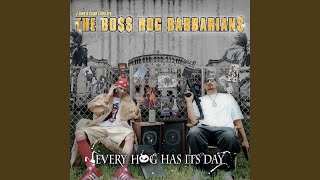