[Intro]
His name is (Lyrics Born)
and he is, as they say, wild and crazy
As a composer, arranger, and producer
He's exploring it all
From the furthest reaches of musical outer space
To the most down to earth funk
And he sounds, well, he sounds exactly like this

[Verse 1]
Nobody 'members those
Rap City episodes from twenty years ago
When you were the guest host
Past history, let it go
Get off on a medical
Pack a duffle bag with all your wrinkled clothes and pedal home
Get a little dictaphone and sit alone
In the middle of the room and let it flow
Wouldn't it be better
If you went and chose a new career path
Like a shepherd or a flight attendant on an aircraft?
You're pitiful, a pollywog
Tiny fishy in a smaller pond
Holding barbie dolls and leftover beads from the Mardi Gras
Actin hella hard but that's just poppycock
'Cause inside you're hella soft like a Jolly Rancher lollypop
I'll give you cauliflower ears stupid
You're weird
Feelin blue
On a stool somewhere, two-fisting beers
At a Hofbrau
Moaning like a hot cow
Cryin on the shoulder of some old man you met just now

[Verse 2]
Look I'm sorry, mate
This is awkward, k?
Little hard to say
So I'll just say it
Me and your mommy date
She's awfully great
She's a soft seatmate [?]
She calls me late
Always wants to meet
On her coffee breaks
She bought me seats
To Bonnie Raitt
Now there's no concrete date
But she bought the ring
It's Marjorie May [?]
And my stockings stink
From my foot up in your ass
'Cause you drive me absolutely batty
See I'm crabby when you get around me
Tell me who's your daddy
Call me Mister McAffee, your poop-deck pappy
Shut your trap and get back in the backseat of the Camry
Don't sass me or I'll backhand you
smack you with an axe-handle
Burn you with a wax candle
Slap you with a sandle
I'm trying to watch the rap channel
Can't you tell we laugh about you?
Call yourself a rapper but I gives a rat's ass about you

[Verse 3]
Why do I even bother with these Hoff-brand cats
Y'all are wombats man
I'm bout to blow this pop stand
Lyrically y'all don't compare to me in any contest
Like a stealth bomber up against a Hyundai Accent
Tall-can to a shot glass
Bong-hit to a contact
Gary Coleman versus Big Boss Man
The Loch Ness Monster up against a crawdad
Talking Sly Stallone in Rocky versus Sly Stallone in Copland
Judge Judy versus Johnny Cohcran
Oh man
Nell Carter versus Karen Carpenter topless
Better yet, Broadband
Compared to a long ass
Piece of string connecting two pop cans
It's all bad
Don't quit your job at all believe me you'll be so glad back
Hold on with both hands
It's sucks washing sauce pans
I know there's an off chance that one day hip-hop heads
Will maybe feel rappers in the top-ten that crossdress

[Outro]
Ever since his triumphant return from his first album, L.T.D.
Critics are calling (Lyrics Born) the brightest new star in years
(Same Shit, Different Day) is his new album, on his own label
And it's got the kind of top talent (Lyrics Born) always surrounds himself with
Here's a sample of what they're raving about 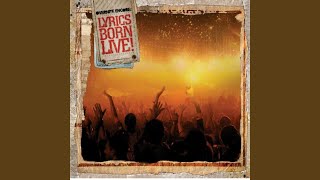