When The Night Comes Lyrics

When The Night Comes Lyrics


The offices are emptying their pale-faced wards into the street,
Flickering their strip-light eyes, shivering they readjust their lives
From the air-conditioned heat.
The humdrum and mundane
Is nearly driving them insane.
But you get hooked so quick to anything
Even your chains,
You're crouching in your corner 'til they open up your cage.

Frankie takes the train and makes it home in time to catch the evening news,
Opening a can of beans he learns the world has turned without much help from him.
Hey Frank, why not get drunk tonight?
Hey Frank, I think it'll be alright,
You'll be too far gone to notice when the neighbors start complaining,
But they're used to it by now, every day's the same.

And when the night comes,
He might get on the phone,
She's a stuck-up bitch,
But she lives on her own, And he heard her talking dirty to the girls the other day,
And she knew that he had heard her and she looked &quotas if to say"
And then later up in marketing while going through the files,
She bent a little too far down, then turned around and smiled.
He got her number,
He got the phone,
He dialed the number,
He heard the tone.
He said &quotTonight's the night that I've been waiting for,
Oh I know you've seen me worship you from afar,
And I might tell you that I love you and I will but just for
Tonight, one night, alright tonight."
In his three piece cunning camouflage nobody
can guess what Frankie's thinking,
Last night she said &quotI don't know if I'm drowning
Maybey it's because I'm sinking."
He said &quotIt'll be okay
I'll get outta here one day"
And she said &quotFrankie, you're no different from any of the rest,
They've nailed you to that table and chained you to your desk."
But when the night comes.... 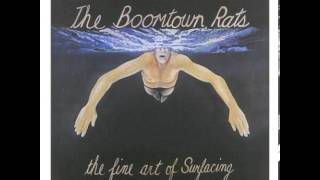