Joey's On The Street Again Lyrics

Joey's On The Street Again Lyrics


Sooner or later when the dawn was breaking
The joint was jumping and the walls were shaking
Joey sneaked in the backdoor way
Pretending he was with the band, he never used to pay
He was no great draw at pulling the chicks
He used to lie against the wall like he was holding up the bricks
And all the things that guy used to do to get his kicks
He was a legand in his lifetime with the neighborhood kids

Joey grew older, older without a cause
Got married, had some kids and had his brushes with the law
Settled down and got a job, then said &quotI'm leaving" one day
&quotI've gotta hang loose a while, take care while I'm away."
People said they'd seen him, they were nearly always wrong
'Cause no one knew how much he had, where he'd gone or for how long 'Til one day there came a rumor, floating from the docks
Saying a crazy stranger had been found lying among the rocks.

The said &quotJoey was this" and &quotJoey was that"
Oh that guy was crazy, what a crazy cat
But no one quite believed it, all rumors are the same
And now if something happens they say....
Joey's on the street again.

When Joey moved away
A lot of the kids said &quotI can't stay around here"
They said &quotI'm moving out, going away
They said &quotI'm leaving, getting out
&quotI'm gonna go somewhere where it doesn't stink
Away from the alleys, somewhere I can think
Wash the dirt from my hands, watch it wash down the sink
It's a strain on the brain living close to the brink

Look at the brickwall gravestone where some kid was sprayed
Saying nobody could be bothered here to rule O.K.
Don't believe it, don't believe it what they say on TV
There's no romance, no romance
For Joey in this city. 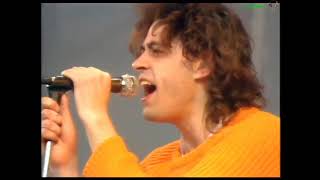