[ Ganxsta R?dd]
Man
All I know when we get out
We finna roll
Check this one out

Brothers, do we got bass?
[ all ] (Yes, we got bass)
Too many busters out there on the streets
We gonna have to take em out

[ VERSE 1: Ganxsta R?dd ]
But before we go on, my name's Ridd, not Ren
It's me again, comin out the lock-in
O.M.B., my brother, bring on the bass
There's dollars to be made and posses to waste
Pass by the hood to pick up the gat
Stop by the studio for the new track
Q Ball rollin, 8 Ball in the pocket
Just bail on stage and pull the mic out the socket
Boo-Yaa dogs (woof!) locked on the canine
It's '89, it's time to get mine
This madness, you never had this
Home of the O.G.'s (we threw out all the faggots)
I'm pluggin my microphone with full-equipped lyrics
MC's smell the smoke of my mic and they fear it
I'm known to be the hanger for the MC's I hang
I throw a riddle, it come back like a boomerang

You gotta know this one

[ VERSE 3: Ganxsta R?dd ]
(Put Riddler on the roof) cause I shoot the vics
My mission was to shoot straight to the chicks
I filed a contract, not to confess
Found out that the buster had a bullet-proof vest
(So what did you do?) I had nothin to say
Pulled out my Uzi and I started to spray
Went to the morgue to identify his body
(Yeah, that's him, ??? posse at the party)
I'm not prankster, word to Godfather, I'm a gangsta
And this is the time I'd like to give thanks to
All my brothers for doin it (their way)
And now it's my way, we're not here to play
Boo-Yaa - please, who can match?
Like a purse on Imperial (you will get snatched)
And like a Camel in the county (you will get smoked)
And when the Riddler took the loco toll (that was loc'ed)
Check out O.M.B., my bassman, forget the turntable
(Island) the name of my record label
That's the reason my jams sound so hard
Cause it's boomin from a bailin car
Down the boulevard and we don't stop
Cause all you posses get mopped, get dropped
We rock the party, steal all the ladies
Since it's '89 we're in the Eighties

(Attention, all D.R.
This is a R.A.I.D.)
He-he-he-ha-ha
Explain lyrics
Correct lyrics 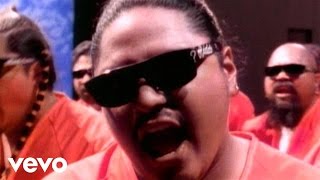