Hi... Glad you called.
Guess what I'm doing right now!
Mmmm... That's right.
I'm walking along Hollywood Boulevard.
All I hear are people around me asking each other
"Who's here? Who's here?"
But... we know there aren't any stars out here.

You know what I'd like right now?
Mmmm... That's right.
Chocolate cake with ice cream.
Mmmm...
Palm trees are swaying wildly around us.
And the sky...
Grows darker and darker...
People are already on the streets.
Some in terror, some in wonderment,
Most... confused.

You and I...
We watch the funnel clouds hypnotically inch toward the ground,
And upon touchdown, turn into atomic mushroom clouds and explode.
A few spectators applaud.
Scared shitless, we duck into the Spanish Pavilion, but...
It's remarkably unremarkable.
There's nothing much to do so,
We go downstairs where... That's right.
Nude and lingerie-clad girls are having a pose-athon.
Guess what I do!
That's right.
I throw caution to the wind and peel off my girdle,
And take my place on the red vinyl ottoman
That stands in the middle of the lobby.
The walls are covered in full-length mirrors.
You have to admit the scene is pretty sexy.
Then, I think to myself...
"Is it politically correct to even be here?"
I mean, look what happend to Dorothy Stratton.
Then I decide...
"Oh, the hell with it, I'm horny!"

Just then, Jeff, the famous balding actor,
Famous for his tattooed 'Rebel Rose',
And loose-fitting Italian suits, walks by,
Sullen and contempt.
He talks to us about... That's right.
All the toys he buried in his backyard
So noone else would play with them.
He says one of his favorites is his Nick Cave Doll.
I feel pity for the man, and hope one day
He'll grow hair.
Then... I think...
"Wow! They have Nick Cave Dolls now...
I waaaant ooone!" 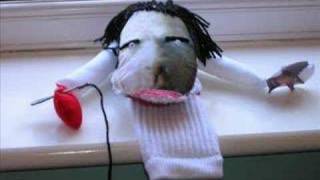