Down Foe My Thang Lyrics

Down Foe My Thang Lyrics


[Layzie]
Creepin' up outta the woods, gotta give love to my hood
Smoke, and I choke, and I creep on a come up
Niggas be tryin run up, but I bust, and they drop to their death
Now they done up. Gun up, hunt my blunt up
Creepin' 'til sun up, feelin' slightly shady
Call me lightweight crazy, number one nigga little Layzie
Nigga don't wanna fight
runnin' deadly thugsta soldiers, droppin' them thangs
Bone done told ya. Testin' nuts, so a nigga gonna have to show ya
Faded a nigga that stepped up. Let's slip in some shit
See 'em alls just stood up then put a foot up that ass
had to blast that click-click
Sprayed the gauge, all cocked, and ready to spray down to the pave
Puttin' them souls up off in them graves
dwell in Hell, they'll all lay slayed
Amazed, must I blaze. It's insane when I take that bud to the brain
Toke, choke, holdin' me smoke until-a me strained, feelin' no pain
Better be packin' your weapon, 'cause my shit is kept
And I'm ready to let loose sawed-off hangin'
danglin' up under the trench, fin to blow that chest
But you shoulda wore a vest, fool, 'cause the Bone don't front
Nigga check or get wrecked
Got Flesh on the set, with his finger on a TEC
Loc'd out with the khakis and high techs
Respect them St. Clair thugs hustlin' drugs, gotta make that money, man
Rap be the thang, and the fact remains that we owns that rap game

Bang, bang, gotta get down for my thang
Bone be me gang

[Flesh]
We runnin' with no hoes, and the bigger Bone that's
known for gettin' his swerve on and kickin' it on the stage
(Off in the rag), gettin' my serve on
So, leave 'em alone. They come
They need to be shown that Bone done chrome, blown
Lay slugs up in to them domes, so go on
You'd rather go run a ho check, if you wanna test nuts with Flesh
I'm feelin' to lynch ya, mo murda
You're runnin' up eye to eye with death
Praise the Flesh, now nevertheless you're takin' a loss
and this slug snuffed up, and dumpin' the body up off in a coffin
Remember the vow said a preacher, me teach 'em
(winnin'/greetin') 'em with me nine, runnin' with thugs
And hustlas and murderin' 'em every time

Bang, bang, gotta get down for my thang
Bone be me gang

[Bizzy]
Remember the Ripsta, sinster creeper reapin' up that set with a street-sweeper
Gotta take a breather from sippin' me liter
Rippin' that flesh when I sneak with a meat cleaver
When I'm in me smug, never the studio thugsta
Buck 'em. Buck 'em. Motherf*ck 'em
Thug never done bluff and f*ck them bustas
So back up off me. No stack won't let me slip
When a nigga start to step, the weapon, put 'em in the graveyard
Bitch, better buy your vest, then test Rest, the Ripsta
Quick to pick up the hollow points and put 'em up in your brains, nigga
My little nigga, Mo! Hart, my bigger nigga, Sin, dash fast
Get up with the block at last blast they ass, pass cash, then stash
Me can killa for free for homies and family
Tell 'em to see me, that realer nigga, the Ripsta, put 'em in rivers
It don't stop. Drop P's to the SCT's and double glock. Pop. Pop
Here's the slug from the twelve gauge thug
You don't want f*ck with, no buck with, Rip's breakin' 'em bustas
Blood, me fillin' 'em ? me murder. I show no mercy
Turn your back, clack back me gat, diggin' 'em in the dirt, see

[Krayzie]
Get ready to duck, bitch, or get f*cked up
They never could f*ck with me sawed-off pump
Bitch, if I'm flippin' or load my clip in, nigga, y'all all f*cked
Gotta make my money, slippin' me pump in my trench, and then click it
Now, nigga, it's rippin', steady clippin', not missin', thuggin' with me click
And now Leatherface takin' your life so ya best stay back
Tossin' the rest in a coffin, 'cause niggas be runnin' up, talkin' trash
Buck a guard while walkin' past. Bang, bang, gotta get down for my thangs
And I claim and hang with Ts, niggas that make cheese for the green leaves
Gotta give peace, 'cause they swang these. Come, nigga, meet my hood
And fulla nothin' but thugs and hustlas: Sin never been no busta
He'll stuff and buck-buck 'em and dump 'em, bitch
Nigga, muthaf*ck 'em, Krayzie don't love 'em, put 'em to rest and run
So the po-po don't catch up--nigga can't be arrested
One M-11 me sendin' niggas to hell, and you're feelin' 187
Eleven dwellin' better from the cell, and nigga that pick up Mossberg
The quicker you to the curb. Put one to the temple, pump, to Mr. Policeman
That's all you heard 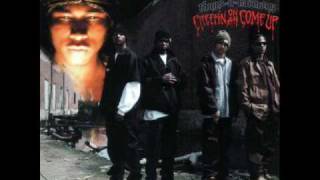