[Bizzy]
This rap game terror
Money, murda mo, and allt hat good shit
scandalous niggas, respect this... (Bone Thugs)
Ask about my... 20 inch deep dish rims
Son of a chicken, it ain't no friends
when it come to the end... (Bone Thugs)
And I'ma say word to gangstas
Real killers with money to burn
Sayin we a lost cause, foster kids-preach the world... (Bone Thugs)
Thank god that I had a father
I'm pushed in that coco with my sister
when I was 14 like cancer victims... (Bone Thugs)
Uh huh
Cause haters they get quarantined
Women they comin' with sorcery
I'm livn' with curses, smokin wed... (Bone Thugs
Burn me
Don't bury me
Hurry 'fore my momma see me
Somebody call Johnnie Cochran
Some niggas they wanna be Biggie
Some niggas they wanna be pac
But I just wanna be Bizzy
As soon as they hear me??
Like Richard Sim-mi
Don't run away, where's your nuts at
It's the original hydro smokers, somebody bust that
Trust that, what's packin'... (Bone Thugs) 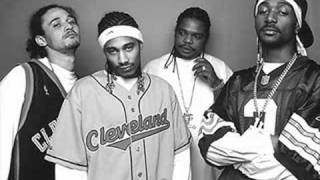