Tangled Up In Blue Lyrics

Tangled Up In Blue Lyrics

Early one mornin', the sun was shinin'
He was lyin' in bed
Wonderin' if she'd changed at all
If her hair was still red

Her folks, they said, our lives together
Sure was gonna be rough
They never did like Mama's homemade dress
Papa's bankbook wasn't big enough

And he was standin' on the side of the road
Rain fallin' on his shoes
Heading out for the old East Coast
Lord knows, he's paid some dues gettin' through
Tangled up in blue

She was married when they first met
Soon to be divorced
He helped her out of a jam, I guess
But he used a little too much force

And she turned around to look at him
'Cause he was walkin' away
She said, "This can't be the end
We'll meet on another day, on the avenue"
Tangled up in blue

When he drifted down to L.A.
Where he reckoned to try his luck
Workin' for a while on an airplane plant
Loading cargo on to a truck

But all the while he was alone
The past was close behind
He'd seen a lot of women
But she never escaped his mind, and he just grew
Tangled up in blue

And later on, as the crowd thinned out
I was about to do the same She was standing there in back of my chair
Said to me, "What's your name?"

She lit a burner on the stove
And offered me a pipe
"I thought you'd never say hello", she said
"You look like the silent type"

And every one of them words rang true
And glowed like burnin' coal
Pourin' off of every page
Like it was written in my soul, from me to you
Tangled up in blue

But me, I'm still on the road
Headin' for another joint
We always did feel the same
We just saw it from a different point of view
Tangled up in blue 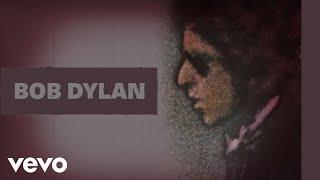 Rate Tangled Up In Blue by Bob Dylan (current rating: 10)
12345678910
Meaning to "Tangled Up In Blue" song lyrics (1 meaning)
acidreign February 24, 2011-1:58
-4
a lot of these lyrics are wrong! he sings it in the first person so all the hes are spouse to be i's the whole last verse is wrong as well totaly missed the dealing with slaves part
Watch Video Comment Enlarge font Correct lyrics Print lyrics