Rambling out of the wild west
Leaving the towns I love best
Thought I'd seen some ups and down
'Till I come into New York town
People going down to the ground
Building going up to the sky.

I swung on to my old guitar
Grabbed hold of a subway car
And after a rocking, reeling, rolling ride
I landed up on the downtown side:
Greenwich Village.

I walked down there and ended up
In one of them coffee-houses on the block
Got on the stage to sing and play
Man there said, Come back some other day
You sound like a hillbilly
We want folksingers here.

After weeks and weeks of hanging around
I finally got a job in New York town
In a bigger place, bigger money too
Even joined the Union and paid my dues.

Now, a very great man once said
That some people rob you with a fountain pen
It don't take too long to find out
Just what he was talking about
A lot of people don't have much food on their table
But they got a lot of forks and knives
And they gotta cut something.

So one morning when the sun was warm
I rambled out of New York town
Pulled my cap down over my eyes
And heated out for the western skies
So long New York
Howdy, East Orange. 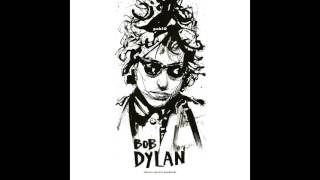