[Verse 1: Fashawn]
I was in love with the block, call it the avenue Jones
Through the village we just happened to roam
Knuckleheads, bad to the bone
And every single snotnose had an addict at home
I drunk Vodka and juice with the fatherless youth
Everyday in between the hours of two we ate taco's and hoot
Every now and then somebody would shoot
They hit that younging with a stray while he was tying his shoe
Let if off then they hopped in the coupe
And nobody said a word about the body on the curb
Hit the homie Flacko, that's the vato with the herb
I mean papi cool, but his posse full of herbs
Got a Chronic from the 'burbs
Around the same time I was trying to learn
How to pick a lock with a hanger, load shots in the chamber
Get low from the cops and the neighbors
Boys in the hood

[Verse 2: Like]
Born and raised in killa Cali, dreaming one day the city's ours
Young niggas hopping fences licking chili powder
Eddie Bauers and doctors passed, Stockton to Ladera Heights
Young kids wearing Nike's sharing bikes, tearing mics up
Kept a nice cut in the fades
Never affiliated, but my niggas bang getting paid
Shouts to my grandma, still in the J's
Coco ave. fo-fo mag tucked away when the po-po's pass
Walked to the stove, but don't step on the old folk grass
A 80's baby like Thrifty's and Pick 'N Save
Wear the wrong colors might as well dig your grave
Ditch your school to throw hands, stick and move
Bagging chicks at Fox Hills like shit was cool
Different dudes, go by a set of different rules
We obviously ain't got shit to lose, boys in the hood

[Verse 3: Blu]
I got the old 3 sitting on my neck for my set
Big B sitting on my chest for the best
Headed to the East, raised in the West
In them streets I think you need a cage and a vest
Ducking strays on my way to church, on my way to work
Blazed trying to lace a verse so I can pay the first
Blu be copping chains, shopping days 'til my pockets hurt Rob a purse if she see me in a soggy shirt
But on the turf niggas flipping work, chickens chirp
On a flirt, nonsense, no smirk, jerkface, tell the jerk
Burgers in a shank
If she think she worth what she work she need a break
Pissing off the city with a silly cigarette on my BMX
With my Rollie on and my Holy text
Telling Moses ''you can lead us through the sea''
But you can't keep seas out the streets
Boys in the hood

[Verse 4]
After school niggas eating Cheeto's by the tether-ball
Tony Starks had me fiending for them leather Clarks
5-0-1's, I'm starched, creased up
Niggas going chesting, we watched Darkwing duck
Bad niggas rocking duck tails, thermos with the lunch pail
Taking trips to Catalina and niggas swear we upscale
Puff L's, OE cans of Mickey
Real Venice before they turn that shit to Abbot Kinney
That past is in me skating through that 818
Homies out the pen like Ray Lewis gaining weight
It ain't for play
Thought you know them boys that banging the whole hood
Shook, just off of Northridge quaking
Ta-daw, nigga, domino!, my uncle bumped the Commodores
Humping on the sub and just be done before their mama home
Reminiscing with these poisonous goods
Dopeboy, get that dope, boy, boys in the hood

[Verse 5]
Lost in a promised land milking honey's
A field of dreams, this the city of angel
Set your neck on the line, that shit'll get strangled
What you expect? Besides connected, the culdesac counsil
Starter jackets, and Sauconys, the sauce in me
And a sordid past
Fresh from court, no boarding pass
Pour more with a taller glass
Monetary support towards some college class
A wealth of knowledge, hustle mania
Game became placed to make with power
Sitting on the stoop like a substitute, solid
Chopping it with the barbers displacing transplanted
Sipping a chalice in childish comfort
The colors got colored improper
Shuffling shuckers, cool suckers, cards for audit 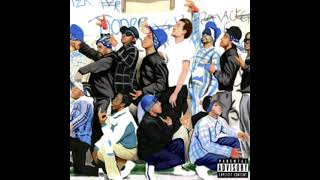