[Verse 1: Blitzo]
It's a sign when I'm decided, my design is something I did
Riding live and diving right in by the time that I've been sighted
I've arrived, and by the shine that's in my eyes, I mean inside it
While we're dying side by side and I'm the pilot
A Violent Climate
Alive and climbing, a line of islands aligned
A mind kinda divine, the kind that silence a crime
The kind that rhyme on a dime
Hi, I'm inclined to nine nine nine, a time prime & sublime
Rewind and remind, combined and refined, confined in a mine
Prime-time swine can all die, and I'm fine
f*cking slime...
This is who I am and my ancestors know
That our family tradition is to slam whiskey low
Since Little Brook Lane, had a little crooked brain
My chemicals were bubbling and cooking up some pain
Life is an experiment, but what are the results?
Time to reappear again and bust open these vaults
Every second I get older and appreciate my breath
Now I'll take a deep one, alleviate my stress
(Gasping breath)... Emaciated chest
Feed me some energy and sweep away the mess

[Verse 2: Benefit] Sharpen these bars into weapons, you get your abdomen slashed
If we happen to clash, stabbed by the javelin thrash
Garbage rappers are touring, nothing but traveling trash
Babbling crass, blabbering you blathering ass
Crush every rapper in my path to gravel and ash
Have your little rap persona unraveling fast
I'm not mad at you cats, in fact, I'm having a blast
The blast will have you scattering past, shattering glass
When I shine on these roaches and rats all the scavengers dash
Ravenous, a rapping savage that just ravages tracks
Average rappers just rapping about grabbing the cash
Give me a bat and I'll bash a lab without batting a lash
Beats are dirty and never considered having a bath
Greater than every rapper and it's a matter of math
The mass of my rap pattern smash an atom in half
Lashing at them in wrath, blasting at them and laugh

[Outro: Blitzo]
Every second I get older and appreciate my breath
Now I'll take a deep one, alleviate my stress
(Gasping breath)... Emaciated chest
Feed me some energy and sweep away the mess 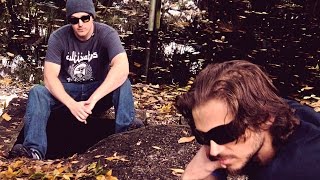