[Rocky B]
In the beginning there were two decks and a microphone, in the end the Blazin Squad stood
alone, we're the Eastends best kept secret, ten men in our crew, TNT Xplosive bfinging the tunes
we're busting standaer flows.

[Melo-D]
I'm blazin hot like the heat of the sun, no time to loose put the suppressor on the gun, make
no mistake cause Melo-D is number one, dont even want to step me because the battle has been
won, hype up the set 5, 4, 3, 2, 1, better brace yourself for the fight is to become, a battle
of all dapa d's fighting for the right to be a garage MC.

[Strider]
Stop, wait here i go, MC Strider top of the show, come step to me im a p-r-o, if you get rude,
get peoples elbow, we're coming at ya with the standard flow, you've hit rock bottom, and then i
bust the eyebrow, so step to me your get done, don't hesitate just bring it on.

[Flava]
When i come through black suit, white shirt better quit the game, you aint gonna be the one
with money to gain, yo, throw your hands in the air if you wanna test this, ha, thats what i
thought so i said you couldn't, and even if you could, you know you really shouldn't, i'll pull
it over your eyes and over your face and Flava's surprise is what you can taste so don't be
late, coz these cats tempt no fate, MCs wanna hate never wanna act bait, so fat,so never sound
wack on this track, takin your boys, my kru be down for these cats.

[Spike-e] Cotched in the back of a blacked out car, with the rythem rolling upon the speaker, chromed out
alloys and a lower bumper, twin exhaust and a private number, Spike-e MC gets your hyper, you
think i'm dark well i go deeper, think your quicker well im just quicker, two spinning decks and
a fat mixer, think you're bad well im just badder, bare fake MCs and i cant stand ya.

[Krazy]
This one's standard this one heavy this is a story all about me the one the Krazy, you know im
heavy, cause whern im on the mic im a lyrical G, im a raver, going further, getting louder, for
the one tounge twister, Blazin Squad will get ya hyper.

[Kenzie]
Back in the beginning it was me and Flava, the two best MCs inside your manor, enter the
streets with your Dolca and Gabbana, get the listening raver hy-pper cha hit em with the flash
lighter, up middle we come and get ya, enter my H and G selector when im spitting out my lyrics,
spitting out my lyrics, pull by the trigger its another winner, my lyrical flow will just make
you shiver, Kenzie MC with the lyrical thriller, westside i just stand and deliver zimm zimmer
get up make you quiver cruising right behind you in my bim bimmer, joy riding police man under
cover me and my crew we do it proper. 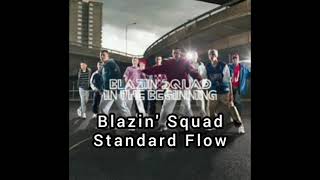