Bitch, you can straight up eat a mothaf*ckin' dick! I'm lookin' at the
mothaf*ckin' frontline. I see Violent J....Anybody Killa...and that
mothaf*ckin' dead homie, BLAZE!! See, we represent a mothaf*ckin' hatchet on
the daily. WORLD WIDE BABY!! But for this moment in time, we wanna give up
props to D-Town (DETROIT!!!)

Straight outta Detroit, crazy mothaf*cka named Blaze
Back from the dead, tell my story on the front page
When I'm jackin'
I got a Mack-10
Squeeze the trigger off for criminals and axes
Which wanna y'alls wanna f*ck with me?
The police are gonna have to come and get me
We stompin' yo ass, bitch I ain't goin' out
All you suckas, ain't nobody showin' out
Niggas wanna set trip
Try and talk shit
Cold cock yo' ass and leave you with yo' wigsplit
Goin' off on any bitch like that
With a gat
That's pointed at yo' dome!
So give it up sucka
I'm down with Anybody, "Drive-By, muthaf*cka!!"
He's a murderer, best keep yo' distance
Down with the Family, like Charles Manson
Crook throwaway is a mothaf*ckin' tool
Don't make me act a mothaf*ckin' fool
Me and you can go, toe to toe, maybe
On the corner, strapped, slangin' rocks daily
And turned weekly, monthly, and yearly
All the thugs in the hood represent me
Cuz I'm down with a capital D-E-T
Bitch, you can't f*ck with me!
When I'm in yo' neighborhood, you better duck
Ya Dead Homie, still crazy as f*ck
Mashin' on you bitches, I think you get the point
Eastside, mothaf*cka, comin' straight outta Detroit

"Yo, Anybody, tell em' where you from!"
Straight outta Detroit, the name is Anybody Killa
Every bitch I choke, yo, my rep gets bigga
I'm a thug muthaf*cka, and you know this
But you playa hatin' bitches better never ever show this
I don't give a f*ck, I make my cheese
Middle finger in the air screamin' "f*ck the police!"
Straight servin', we call a cop car, jack it
Run your donuts, your guns, and your badges
Shoot a muthaf*cka in a minute For some hood rat p*ssy and go up in it
So if you at a show
In the front row
I'ma call you a bitch if yo' ass ain't a juggalo
Bitches gettin' mad, bitches ain't shit
Bitches and hoes can eat a muthaf*ckin' dick
I'm a crazy muthaf*cka from the streets
With them thug ass lyrics and them thug ass beats
Anybody controls the automatic
So any punk muthaf*cka that start static
With my dead homie, or by myself
Everytime, I pull the AK off the shelf
Security is maximum and that's a law
K-I-double-L-A, I'm raw
Bitch, I'm a muthaf*ckin' villan
Stand in my way and you're witnessin' the killin'
Creepin' up without a clue
And once you in the scope, yo' ass is through
So bitch, you better get a grip
Cuz Anybody Killa's on a gangsta tip
Straight outta Detroit!

"J is his name and the boy's comin'..."
Straight outta Detroit!
Is it nut that I'm cut
Like whut?
And make your sister eat butt
Dangerous
A thug claimin' Southwest
I'll leave an axe hangin' outta yo' chest
See I don't give a f*ck, that's the problem
I see a muthaf*ckin' cop, I'ma stop him
Play it smart and ask for directions
And then shank him in the f*ckin' midsection
To me, it's kinda funny, this Prozac
I don't know where the f*ck I'm goin' or where the f*ck I'm at
I'm just rollin', lookin' for some ecstasy
So I can get high and f*ck this bitch next to me
Ruthless...is the label that's floppin'
But the hatchetman be choppin'
Cuz it really don't matter bout me
It's all Anybody Killa and Blaze Ya Dead Homie
Feel a little gust of wind and you're dead
Cuz an axe just severed yo' head
And what about the bitch that got shot?
She gave me herpes so I shot her in the back
This be an autobiography
Of Blaze, he's dead and gone, but ain't lonely
Dark Lotus will slaughter your mother
And slap your brother
Straight outta Detroit! 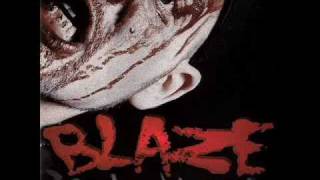