I'll tell me ma, when I go home,
The boys won't leave the girls alone.
They pull my hair, they stole my comb
And that's all right till I go home.
She is handsome, she is pretty
She is the belle of Belfast city
She is courtin, one two three
Please won't you tell me who is she?

Albert Mooney says he loves her
All the boys are fighting for her
They rap at the door and they ring at the bell
Saying 'Oh my true- love are you well?
Out she comes as white as snow Rings on her fingers, bells on her toes
Old Jenny Murphy says she'll die
If she doesn't get the fellow with the roving eye 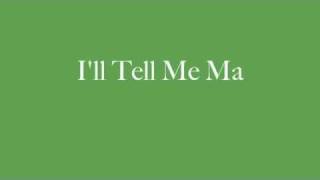 check amazon for I'll Tell Me Ma mp3 download
these lyrics are submitted by kaan
browse other artists under B:B2B3B4B5B6B7B8B9B10
Record Label(s): 2012 R B Puddin