(Gift Of Gab):
Rappers step to me like I'm a doormat
Check the format, I pour raps
Not your average everyday hardcore act actin'
I'm like a mac 10, a uzi and a AK-47
Rollin' with crazy kids like Bebe
Mayday mayday, I used to listen to KDAY in my heydays
I ride the bus with a dream of one day lampin' inside of a Mercedes
Benz with sheepskin interior
And two fifteens, and to rip means to get creamed
I'm large as a hippopotamus, trip, I gotta dis
Sip a bottomless cup of brew and I'm getting raw to this
If a rapper tries to step, I rip and slaughter his ass
Some shit, he oughta just swallow his pride and get to following this
I'm marvelous like Marvin Haggler in his prime
I carve kids like a dagger with my mind
I start shit with rappers who can't rhyme
I spark spliffs cuz I don't stagger when I'm high
But when I'm drunk I do, punk I do not acknowledge wackness
I gotcha grandma doin' backflips and tumbles
I rumble through the jungle with Ollie and Frasier
Call me the savior of hip hop
I rip shop and get my proppers
Come get with this ak, my style is akwards
I never mock words, I talk towards the inner city youth
Revealing it, the truth
I'm feeling that the proof is in the pudding
I put men that would end hip hop in my shop and I torture

Chorus:
Check out my lyric fathom
Check it brothers, really, check it out

(Gift Of Gab):
As I walk through the jungle with a knife on my ankle
Taking lives, skip will shank you lyrically
Apparently niggas wanna sleep still
Keep still, I'm packin' the a heap of skills
I'm rhyming to keep an ill mind, Saddam type shit Your arm might get snapped like a twig
Rap like a nig-gero possessed thorough
The astonishing mission, dishing pain
Fishing in brains, plain lynching niggas bitchin'
So take a ride, I'd abide by my rules
Cuz fools I had duels with, I left them in the pool pit, I rule kids
I'm a kamikaze bomb, drop a nigga with an arsenal of drama in my rhymes
With the tracks and backs and heads is broken to pieces
Rapture's phat, ya dead, ya croaked
I wrote this piece as just a little dedication
to the rappers on the other level
Budded out and looking into space, a new frontier
And I can probably bet cha that we got anything you want here
Cuz punk, we're the crew that make you cheer
The two that make you fear and send you back to the rear
We're here

(Gift Of Gab):
I flip and I rip shit
I whip and I dip shit
With the lyrical form, I did kick it slick
I'm gifted, I'm ripping a nitwit to shreds
Get the Feds to arrest me for slaughtering emcees
That's right, on my testicles
Come get a little array of the skill supreme
Wanna defeat me? My nigga, you should kill the dream
The noise, the boys, the count, everybody
When I drop fat styles that ain't your simple blahzay blah
Lodi Dodi average Joe Simpleton with a average flow
Have to go after you jugular
Then shit gets uglier
Man I hope you take heed
I'm making brain cells bleed in excess amount of hemoglobin
I rap, yes I'm out to see you bobbin' ya noggin'
I've been gobblin' niggas talkin' shit like Hagen-Daas
Stompin' ‘em, mobbin' with the ill ass skill as seen
On individuals who fiend for the real shit
Explain lyrics
Correct lyrics 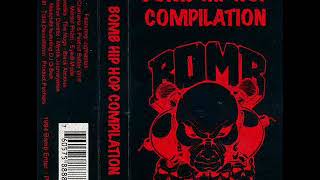