[Peace]
Our house is in the middle of the street
I'm a talkin' head, talkin' head
Spittin' speech, Hungry like A Wolf, Where's the Beef?

[Peace]
My copper top is poppin' tops (tops), the heat keeps blowin'
+Energizer+ bunny, ain't it funny, how I stay so +ever ready+
But I never see the money (money, money, money...)

[Peace]
As a kid, I was Harry Potter-like
Not locked in a room but on the streets, they poked fun and took my bike
Until I chose to write, spec-tacular, vernacular, spells, for the fight
(fight, fight, fight...)

[Gift of Gab]
Heeey ya, raise the bar to another level of rhymin' again
Maaa-jor daaays of, verbal assault tactics that get
waaaay out, Blazin' the bow again to set new trend of flaa-va, Déj-à vu
We blowin' 'em up wit' the way we slaaay-a, saaay ya praaa-yas
Set in the head of the rappers we SLAAY-a
YAAAY-A, HI-YA, HI-YA, HO!
Come on in-SIDE and try the flow
Creepin' up on yo' mind just like a SPID-A KIND-A slow, SHINE and FLOOOW
Sparkle and rock until I can't SHINE NO MO', OHHH!
Low and beHOOOLD, FOOOE
Animal instinct comin' out of the SOOOUL
Chief Coyote, Blackfoot, Savage NavaHOOOOS
Scalpin' yo' top and rock out the spot, off the top knockin'
and then I frolic about the DOOOOOOOOOOOOOOOOUGH

[Gift of Gab]
Choppin' ya, scalpin' ya, offin' ya, moppin' ya, falcons are
flockin' around you, wreck shop while I'm poppin' at Pocahontas

[Peace]
Death it won't fall upon us, as long as I'm Geronimo-an
Keepin' the heater flowin', you know they ain't into throwin' 'em

[Gift of Gab]
Ear to the ground, I hear 'em comin'
Do you really think they comin'?

[Peace]
Ego sonic, hear that thumpin'
Do you really think they drummin'?

[Gift of Gab]
Do you really think they comin'?

[Gift of Gab]
HERE THEY COME! 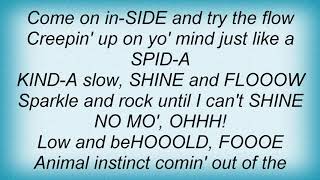