We Boys
Black Sheep
Without A Doubt U Mean I'm Not State Of Yo Similak Child Peace To The Niggas Me And My Brother Let's Get Cozy H.A.A. Gotta Get Up For Doz That Slept
Official page We Boys video Black Sheep twitter Black Sheep facebook


[Mr Lawnge]
Ahh, shit! Get ready for the lyrical beat down
Go for your gat, nigga, you can catch a smack, clown
You think you get props, nope, you're in the wrong biz
Because the Sugar Dick Daddy Mr Lawnge is
Far from diesel but running shit like Eagle Beagle
I swing fast and kick ass like I was Steven Seagal
Sometimes I carry a glock and other times an eagle
And my dick's so damn big that shit should be illegal
Went from a fade to a 'fro to my bald cut
I run with real niggas now and the rest are butt
Your reign is over and you feel it deep within your gut
Now is the boogie down Bronx in the house or what?
When I strike I strike hard and you won't like that
And if I strike out my empire strikes back
My niggas who knock you, so I won't dock 'em, yo
I run deep as if my name was Jacque Cousteau
You're a petty punk, p*ssy nigga from PC
I'll pull your file, I'm buckwild like I'm from DC
You wanted a sequel not equal so here it comes
Now sit back as we run a train on your eardrums

[Molecules]
If it ain't rough it ain't nothing
Big man Cules raise up and then I start thumping
A nigga always into something, now back in the days
I used to sell the woolie-whoos when I was pumping
But now I'm bending mic stands and gripping mics
On some physical type of shit, the type of shit I like
The type of shit I like is this shit that my peoples' on
Molecules, Cee-Low, Smash, Dres and my nigga Lawnge
Now I kick the titles Black Sheep, the Legion
Yeah, you bitch ass niggas, we're coming to your precinct
I'm from the Bronx, I'm a gangster from the projects
Is where I live, peace to AG and Showbiz
Bounce around with G, Show, Dres and Lawnge
And the seven-thirty-five Is, yeah, we got it going on
We grown men, we're not f*cking with toys
Like I said before, yo, we boys

[Chucky Smash]
Down with the Sheep, roll out the black carpet as we spark it
One, two, check it out, uh, right on target
Aim for the heart, yo, get ill cause we're real
(THE LEGION'S IN THE HOUSE!) You know the deal
You're damned if you do, you're damned if you don't
No matter what you want, you better not front
Cause I'm the nigga that's chilling, I seem kind of quiet
And if you even try it then get ready for a riot
One love, one land, how you win?
I owe you nothing because I'm down to the end
The Bronx is the borough, niggas crazy thorough
I'm looking at the Sheep and it's like looking in the mirror
Reflection, twenty-four/seven, representing Hardcore connection, now listen, now listen
Chucky, I feel lucky, got shit caught in the smash
Peace to Barkley, Pinell and Boombash, aight?
Posse with the thickness as we kick this
Can I get a witness, down with Showbiz-ness
Whatever, take it the way it should be taken
Faking backs breaking, but makes no mistake

[Cee-Low]
Round up, round up, round up, 1,2,3
On the down low it's only C double E
L-O, I flow, I flow, I'll let you know
When it's time to catch wreck I catch wreck like an old pro
You might have seen me in a video, heard it on the radio
Rolling with the Sheep, now here we go
One of us bigger, the other small, we never fall
A zigga-zigga, like I said before I love them all
Family affair, by the Legion I swear
To rip up mic stands and tracks to shreds and show no fear
One love with the bang, riding with the zootie
Watch your cutie cause I rap just like a doobie
You know the time and you don't need a watch
Just take a view so we can rock it on your block
It's shocking and tick-tocking all around with my flock
Even if the beat drops me and my crew will never stop
You don't know you better just come on and get with it
Hanging with my boys and we're kicking it

[Dres]
With no tricks the fix comes with dope fiend precision
I exercise and extinguish an emcee exhibition
I explode and expose, extreme my extent
I exist to expand, not excess but excellent
Strength to be the solo representative for the scene
I be the booming bashing, clocking crazy cash yet come from Queens
Fly like Marvel, addictive like Genesis
And if it was a comic, kid, I'd be your arch-nemesis
Blowing up the spot every time that I show up
Grow up before you get toe from the flo' up
Old skool like elementary, Watson
I rocks on, I mocks none and you can't take my spot, son
The one hands above all the shit stains
So hit yourself in the ass, bitch, and give yourself some brains
Here for the record, for the log, for the scope
You can keep your props cause I don't want 'em no mo'
You can't kill my flow, now you know, no denying
That nigga Dres is def, ah hell, he's death-defying
No lying, been dummy since I well a fed me goya
Yo, I'm just nice like Just Ice rocked Latoya
Here to drop a hammer, make you hop to hip grammar
Hot damn, I rock a rugged rhyme from the corner of the slammer
Black Sheep, fab where fam be
Cause I love you and you love me, yeah 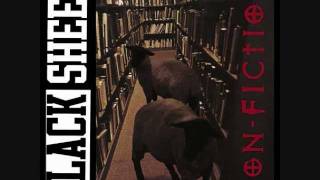