Too much pain, too much sorrow
Eyes bone dry, get on with our tomorrows
I wake up in a pool of tears and sweat
Cryin' for some friends I ain't never even met
Then I hear the drone of a low-flyin' plane
And oh my God, here we go again!

I been talkin' to a man from the CIA
Hey we got you covered, kid, everything is okay
Then why the hell ain't we had an investigation
It's just too complicated
'sides you just don't get the political implications
And you sound like a commie from the United Nations.

Too man friends, too many heroes
Dust in the wind - Ground Zero
Too many cowboys, too many martyrs
Too many questions, not enough answers
Was no one lookin' out for us, is that so simplistic
Brothers and sisters all becomin' statistics

I dreamed I saw the White House - an oil well in the yard
Was I just bein' paranoid?
SUVs, SOBs, gas guzzlers
Didn't conservation go out with Jimmy Carter
Is it just me and my imagination
Or have we sold out the very spirit of this nation?

The talkin' heads are chattering on television
In between ads - the new religion
I wish they'd leave me here just broken-hearted
Right back where I started
Then I hear the rumble of a low flyin' plane
And, oh my God, this thing is happenin' again Ain't no smoke

The gangerman looks at you
Respect in his eyes
He knows you'll work until you drop
'Cause there's a black rage eatin' away inside you
You'd walk through walls, son
Before you'd ever give up
And at night you're like a phantom
Nailin' every you one you can
It's better than lyin' awake in the dark
Thinkin' of her with another man
But she'll never take your dreams away
That's not why you've come
To the canyoned streets of New York City
An orphan of the storm

So you put her far behind you
You hardly think of her anymore
Well, maybe on a rainy Sunday night
You're the gangerman yourself now
Got a new job down the Trades
And every little thing's gonna be alright
Then they blew you to sweet Jesus
On that grand September day
Not a cloud on your horizon
Your heart finally okay
But they couldn't take your dreams away
They were not for sale or loan
On the shattered streets of New York City
This orphan has finally come home 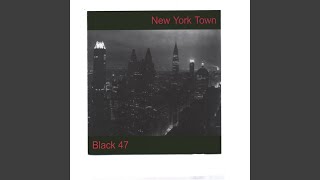