From: thoreau@leland.stanford.edu
"Walk Away Renee"
She said it was just a figment of speech
And I said you mean 'figure'
And she said no 'figment' because she could never imagine it happening
But it did
When we first met, I played the shy-boy
When she spoke to me for the first time, my nose began to bleed
She guessed the rest
The next day we went on a bus ride to the ferry
And when nobody came to collect our fares, why I knew then this was
something special
I couldn't stop thinking about her
And everytime I switched on the radio, there was somebody else singing
a song about the two of us
It was just like being on a fast ride at Fun Fair- the sort you want to get off
because it's scary and then, as soon as you're off again, you want to get straight ba
ck on again
But oh love is strange
And you have to learn to take the crunchy with the smooth I suppose
She began going out with Mr. Potato Head
It was when I saw her in the car park with his coat around her shoulders
I realized
I went home and thought about the two of them together until the bath
water went cold around me
I thought about her eyes and the curve of her breasts and about the point
where their bodies met
I confronted her about it
I said 'I'm the most illegible bachelor in town'
And she said 'Yea, that's why I can never understand any of those silly
letters you send me'
And then one day it happened
She cut her hair
And I stopped loving her.
Explain lyrics
Correct lyrics 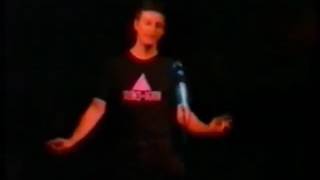