Beauty At The Back Door Lyrics

Beauty At The Back Door Lyrics

There's a washing machine right outside the back door
It's a ringer washer, the kind they don't make anymore
I got my hand caught in it several times
And usually got my ass whipped for it

Even though I's the one that got hurt
There's a snake stick, that's what they called it anyway
By the back door because if you
Wanted to go outside you'd usually need it

Everything's green most of the time except in winter
When you could see the highway, it's not a leaf on the trees
There's an old rock, well, where we clean the squirrels
I used to sit out by that and watch the Carbor girl come down the road

?Cause they was always tore up
She used to walk across the side yard, right by the well
And go stand by the crepe myrtle bush
And look in the screen door

She'd usually stand there for about ten minutes
And back then I wasn't sure what she wanted These days I understand, if I'd a known then what I know now
Well, my life might well have been pretty different

Well, she was about eight or nine years older than I was when I first
Started school I knew there was somethin'
There was somethin' about the south and the air was a lot heavier
And it seems like the women sweat even when they're not

And I walked to the back door and I watched for a long time
And all I could see was trees after a time, I really couldn't see
They came back out and my daddy was walkin' way ahead of her
And she was kinda following, almost runnin'

He acted like he didn't want to have anything to do with her
And I was wondering why, why would you be so happy going in
And so down coming out, I don't know 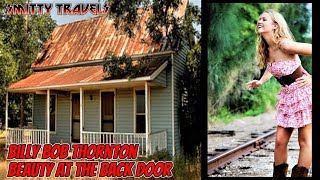