[Verse 1: Big Sean]
Today is a good day
I wish a nigga would day
Ride through the hood day
Ride through the hood where I would stay
If I wasn’t me, wasn’t committed
I told my mom and my dad it’ll be the last Christmas
In the hood that you can visit oh boy I gotta know chasers
Cause the best mixed with Hennessey is problems
I took that advice young when I was headed up to college
Momma swimming in that debt
Rather swim with the piranhas or the shark
Ready set go, on your mark to the top
Getting rich ain’t a blessing it’s a choice
Drunk and still drinking out the bottle
I want a hood rat bitch motherf*ck a model
You ain't alive if you ain't living that’s the motto
And imma’ probably wake up tomorrow sayin, sayin

[Verse 2: Young Jeezy]
Lets get it, yeah be alright nigga
It’s the motherf*cking world nigga
Getcha some time to just do it how I done it
First up on the first cause’ first of all you gotta want it
Re-up time for every penny, never fronted
So room for, paid every penny then I stunted
Stunted so hard you woulda thought I was a stuntman
TS4 with 23’s I’m talking jumpmans
Twos and thirds watch for the blitz
You know they rush
Just don’t get caught in the coupe with them birds
End of discussion
Them boys round the corner wanna sell in that Cal Ripken
If them niggas think I’m riding with that, them niggas tripping Yeah I got a magnificent hustle, cause’ imma’ grinder
Told my olds im hiding you here, so they won’t find you
What you know about a bag that’s heavy as anacondas?
Bet you one thing, I ain’t talking no marijuana
That’s whats wrong with these niggas they think it’s about shine
You niggas get back to your grind, I think it’s about time

[Verse 3: Payroll]
They say it’s my time according to my Rolex
I’m bout to f*ck the game, then your ho next
I used to talk dirty on my cell, no phone sex
No yoga boy I was making blow stretch
Press the fast forward button, I’m pushing a foreign something
All through my neighborhood, next stop is the haters hood
My bitch so bad, but you can bet that my paper good
I do this for real, you lil niggas just fake it good
It’s time for a new crib, it’s time for a new chain
20 thousand on me homie that’s just loose change
Too many diamond chains that nigga a mess
But if you knew bout my hood you’d say that nigga is blessed
Detroit in this bitch, Big Sean what it do bro?
Getting money four ways so I can buy a two-door
Stash looking healthy but my jewelry got the flu though
The hustle’s who I represent, dope boys we in this bitch

[Outro]
Detroit, once the backbone of this country
Now it’s the largest U.S. city to file for bankruptcy
Thriving neighborhoods are now vacant
Going from a population of nearly 2 million
To under 700,000 in a number of years
The people of Detroit really going to have to stick together,
To make it through these tough times 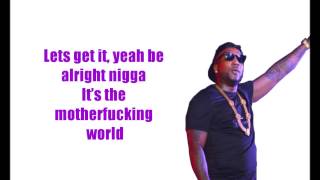