[Verse 1: Gucci Mane]
Section 8 'partments, I'm valid on payment
Servin' that cottage like back in the '80s
We got the gas you can't get at the station
I just hit the dope and then made 'em go crazy
We got more drugs than the nurses at Grady
Porsche on a Porsche, so I'ma send at your [?]
Woke up today, I community gated
Looked in the mirror like, "Nigga, you made it"
Thinkin' 'bout all of the charges I skated
From robbin' and takin' and enter and breakin'
I shake the pot, made it jump to an 80
Smokin' just make my eyes lowеr like Asians
I'm all in Miami, strapped up like a Haitian
Pеople, they shakin', they feel the vibration
Bullets gon' hit, feel a burnin' sensation
Flippin' that turf, have your money and race it
These junkies my patients, they walk in and paint shit
I had the coco, had to tell 'em, "Be patient"
In my duplex with the bricks in the basement
Real street nigga, never wrote no statement
They tell 'em to come out, they hold us to come out
Ball like I'm Jordan, yeah, I stuck my tongue out
Niggas got no cars, they stickin' they thumb out
Keep it a hunnid, I'm bringin' the drum out
I put my gun out, let's see how they tell out
Might just be bookin', they won't put the blunt out
They say it's a drug, make it rain when the sun out
All red Royce, skrrt-skrrt, do a rollout
My word is the law, no cap in my bars
Put ice on my heart and put tats on my scar
Might want a .30, but lobster walk
1017, we ball to ball

[Chorus: Foogiano]
I got sixty shots in this Drac', he move once, won't move again
Talkin' all that shit, we broke his bones, his ass should've come right in
Tolerate, no disrespect, I'm Beyblade how I get to spinnin'
Dump him in that water, he ain't swimmin', boy, that nigga missin'

[Verse 2: Big Scarr]
We don't blank on missions, now he missin'
Swimmin' with the fishes
Wockhardt got me pissin', diamonds glisten
Strapped up with that glizzy
All my clothes be fitted, jeans got denim
These not Jew religion
If I take your soul, I'm not real picky, Reaper my religion
Can't show the internet how I be livin'
Sticks steamer, ride through the city Stay out the way and get paid, niggas all in they feelings
On the internet, talkin' like bitches
Money come in different ways, I'm a jugger
Got Drakes and them bows while I'm breakin' a bitch
Yellow gold on my wrist lookin' like piss
If I go broke, then I'm takin' a risk
How you be slammin', but your buddy got hit?
Yeah, we double back if we feel like we missed
Yeah, I drop the opp 'fore I drop me a hit
I'm not like these rappers, I'm not finna diss
They havin' cake, make your bitch make a wish
I keep throwin' up, niggas keep havin' fits
Ten thousand ain't nothin, blow this shit on a fit
Remember they doubted me, now look, I'm rich
Still in the hood, posted up with the bricks
I still will mask up, put that fire on them bitches
Niggas be put up when I'm in the city
I'm tired of beefin' with niggas who snitches
Niggas don't want smoke, they just want attention
Double like Davy, we standin' on bitches
We really 'bout action, these niggas pretendin'

[Verse 3: Pooh Shiesty]
Yeah, big F&N for these f*ck niggas, low Joe, choppas grab your venom
I'm still with them killers, I'm with [?], you know who shoot the [?]
Ayy, I passed the shot off to KD, felt like the porn God of [?]
I'm overdue, so Wock' trill [?], 'bout two Percocets
I talk shit like I'm five hundred pounds, I'm strapped with like three hundred rounds
And I still'll take your bowl from you, know who quick to slime some shit down
Got thirty thousand on his top, now they on his ass like he Flavor Flav'
I got a cup, no, you can't come around, poured an 8 on this zombie town
And it cost to move, 'cause when I had [?] on
Make sure you sure to a clip when you roll on
Police keep takin' my guns, I can't run out
Slip on his block for so long, now the sun out
Got [?], turn my apartments up, I took my chain back to the condo
We go by codes up in the field, drop an opp, we call that a touchdown

[Chorus: Foogiano]
I got sixty shots in this Drac', he move once, won't move again
Talkin' all that shit, we broke his bones, his ass should've come right in
Tolerate, no disrespect, I'm Beyblade how I get to spinnin'
Dump him in that water, he ain't swimmin', boy, that nigga missin'
Explain lyrics
Correct lyrics 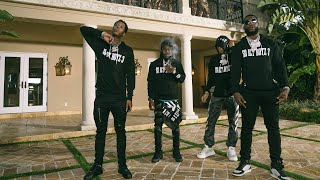