Ay-yo I shatter dreams like Jordan, assault and batter your team
Your squadron'll be barred from rap like Adam & Eve from the garden
I'm carvin' my initials on your forehead
So every night before bed you see the "BP" shine off the board head
Reverse that, I curse at the first wack nigga with the worst rap
Cuz he ain't worth jack
hit 'em with a thousand pounds of pressure per slap
Make his whole body jerk back, watch the earth crack
hand him his purse back
I'm the first Latin rapper to baffle your skull
Master the flow, niggaz be swearin' I'm blacker than coal
Like Nat King, I be rapping and tounge's packing
The ones, magnums, cannons and gatling guns
It's Big Pun! The one and only son of Tony...Montana
You ain't promised manana in the rotten manzana
C'mon-pana we need more rhymers
feel the marijuana snake bite anaconda
A man of honour wouldn't wanna try to match my persona
Sometimes rhymin' I blow my own mind like Nirvana
Comma, and go the whole nine like Madonna
Go try to find another rhymer with my kinda gramma

CHORUS -- When you awaken, your manhood'll be taken
Fakin' like you Satan when I'm the rhymin' abomination (2x)

I'm pure adrenaline, uncut, straight to your gut, medicine
Raw cure for pain I coat your brain like polyurathane
Simple and plain, I'll explain it in layman terms
If you came to learn how to make fire, I'm-a make it burn!
Higher and hotter than lava this scholar
is 'bout just as smart as MacGyver
To put honor inside the heart of a lion
revolved in a life of crime (crime!)
f*ck it I like the shine (shine!), Up in the white and lime (lime!) Comes with the pipe design
Plushed out! (No doubt!) Both pockets about to bust out
If you not in it for the spinach, GET THE f*ck OUT!
Take a hike, we can even battle to make it right
Go 'head lace the mic, you finished? Say good night...
Head to head in the street, I'll leave you dead in your feet
Settlin' beef, I'll even let you rhyme to the Benjamin beat
But it won't matter, you dreams still gon' shatter
It's a long ladder to climb and mine is on the stagger
So get outta town, 'fore I hit you
with the loudest sound you ever heard
Desert bird player you outta bounds

You need the Pun to dis you if your whole steez is unofficial
I'll come and get you and let the desert eez tounge kiss you
With one pistol and two clips, I'll make your crew do flips
Like acrobatics, I'm charismatic, my gat is magic
It makes rappers disappear, whipser in your ear
Crystal clear, come here, let me kiss your tears
Everything you fear is here, you ain't got to search further
The first murder's the worst now I thirst further for reverse birth
Every verse hurts, every curse word's already more offending
Than Eddie Murph's worst
I thirst for blood like a vampire, any man claimin' his game's tighter
IS A GOD DAMN LIAR!
I set 'em on fire, retire your train of thought
Drain a quart of blood out your brain and leave you insane in the dark
The king of New York! Lays his crown in the Boogie Down
And sprays the town, with a Mac hoodied down
I'm no joke! (Yuh!!) I soak your face with a sweeper
Dying disgrace, I'll face your death through the speaker 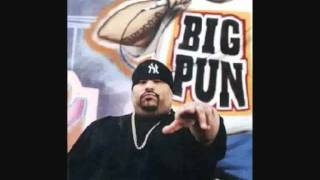