[Hook]
Y.S.P. we a team, Southside connected
Wolverines on the rise, and we well respected
Mob Style protected, infested with game
(breaking bricks of cocaine), and ain't a damn thang changed

[Mr. Sweets]
We some wolverines, with guilotines chopping the scene
With diamond rings, and living like kings
Putting clips in spleens, on some of the funk that I bring
Brain tumors and body wounds, from AR-15's
Niggaz scream, as soon as I heat em with the beam
We can go head up cause I'm fed up, and we might just triple team
I ain't playing with ya, cause when I get ya I'ma split ya
Pay attention and get the picture, them hollow tips can hit ya
Bit ya, I hope they got a body bag to fit ya
If not, I'm hitting the back streets to get ya
f*ck it, I'm back in my bucket and headed home
Shagging ass in my zone, on the streets of Yellowstone
That's my turf that's my hood, it's understood
Tossing it up, whether I know that it's all good
I wish you would, buy a vest for them niggaz
(too late Mr. Sweets, buy a chest for them niggaz)

[Chris Ward]
Y.S.P. we a team, packing a beam
Living a dream, everytime I plot I gotta scheme
Getting my cream, me and my six figga nigga team
Down to do some dirt, it's time to be redeemed
Step out on the streets clean, mugs on mean
I'm a million dollar machine, operating for green Wolverines on the rise, Mob Style and organized
Known for whipping, and flipping cakes and pies
Recognize, a Yellowstone game spitting nigga
Baked up, bricks of cocaine splitting nigga
Hard hitting, hater assassinator
Bitch nigga, exterminating terminator
Loaded cock glocked, with a candy red dot
Busting at any nigga, that wanna get shot
Sixteen to the body, and one to the brain
Breaking bricks of cocaine, (and ain't a damn thang changed)

[Big Pokey]
These niggaz better watch they sweater, cause they call me the chest wetter
Designated ditch digger, with a loaded baretta
Young trend setter, pailing bushes of G's
On my Q's and my P's, 3-60 degrees
Mash with ease, flipping up cassettes and c.d.'s
Trees blown like a breeze, while surrounded with G's
Moving ki's, what you expected we on feet
Mob Style protected, and we slicker than sleet
Release and relief, cause cheaters they get hit with the heat
From your dome to your seat, rapid fire repeat
Game consistent, wrist wear water resistant
Keep a distance from bitch niggaz, cause they flyer than pigeons
Causing collisions, head on in this Southern division
On contracts I discuss, and cause body incisions
Nationality is a fact, that punk shit don't flatter me
Stay strapped 'fore I snap, perform a fatality we on the rise 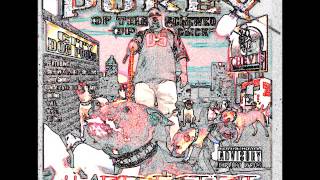