[Hook]
Who the thoedest who the thoedest, ain't no thoeder than me
I done made a complete turn, 360 degrees
Gauge play and killings, compressed bricks and shillings
Grind on shine on, living laid and chilling

[Big Pokey]
Who do this 360 degrees, hotter than hell
On a mash for my mail, pyrex and a scale
Only time'll tell, how many vaults I fill
The number of sets I bled, plus the caps I peeled
Go hard for scrill, if it come down to it
Whole thang I pursue it, then I run right through it
Niggaz thinking niggaz shaking, the block aching fa sho
Mash for my payroll, do it like it G-O
Slam a do' jump out, mug mean for busters
Cardier full of clusters, iced up like Rucker
Clutch a nina with beam, plus I go hard G
Clicked up like Marines, knocking tough guys spleens
Shirt stainers nobody could blame us, we untamed
Rapid fire repeated, to the brain is how it came
Letting my nuts hang, to the god damn flo'
Foot first through the do', letting you know I ain't no hoe

[Big Rue]
Mr. Boulder classic roller, that your eyes can see
I done made a complete turn, 360 degrees
Moving ki by ki', on the blocks you see
I'm stripping chickens down, and whipping O-Z's
Hooked up with a team, something you never seen
Thirty inch bezeltyne, I'm addicted to green
Are you watching my screens, that's in my head resting Red G-S Lexus, as I'm flossing through Texas
Gauge play and killings, on a hunt for shillings
Rue and Po-Yo, as your everyday villains
Ain't no time for stealing, niggaz wigs we peeling
Million dollar smiles, so you know we frilling
Big faces in briefcases, straight weed with no laces
Known to put 4's, in their motherf*cking faces
Three shots to the head, he's dead
Murder was the case, come on wave your hands been erased

[Mr. 3-2]
Who the thoedest we the thoedest, thoed family
Mr. 3-2, ghetto G-O-V
Got B.G.'s that'll kill for me, and I tell no lies
Street game spitter, with mafia ties
Snitch and you die, killer don't talk they peep
Every move you make, and erase you off the streets
My peeps Rue to erase a fake, with Po-Yo
That's sending slugs, through your chest plate
The death rate down in H-Town, is increasing
Especially since you got a thoed dude, like me featuring feel that
Gauge play and killings, f*cked up is how I'm feeling
X drug dealing, with the mind to make millions
Hustling words, I had to put the cheese down
It's cassettes and c.d.'s now, hitting show licks out of town
Screwed Up underground, clicked up family
Taking this game worldwide, now you tell me 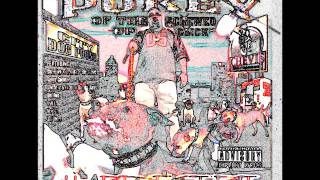