Caught Up In The Moment Lyrics

Caught Up In The Moment Lyrics


She was sittin' at a bar in LAX, readin' Cosmo "how to have good sex"
When she saw him walking through the security check
Well she gave him a wink, said, "come over here, hey hey good lookin'
Can I buy you a beer?" It's like Nelly said, "It's gettin hot in here!"
She said, "I'm headin' out to Vegas on a 747 in 35 minutes down at gate 11
If you wanna get lucky I'll take you to Heaven
He said, "I got a million dollar meeting up in New York City
If I ain't there it'll be a cryin' pity, but somethin' 'bout you's too damn pretty!"

At 20,000 feet on a South West flight she whispered to him, "We ain't got all night"
So he reached up and turned off the overhead light
And by the time they landed sure enough it was more than lust, but less then love
Ther were full-fledged members of the "you know what club"!

He was 10 grand up at a blackjack table, she was dressed to the nines
Drinkin' fine Black Lable he said, "I think I'm gonna cash out and buy you a diamond ring"
So they headed down the strip to the wedding chapel in a stretch limousine that was
Candy Apple, got married by a preacher man that looked just like the king! 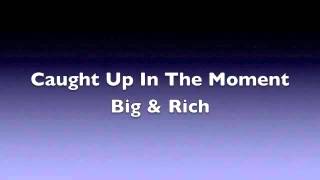 check amazon for Caught Up In The Moment mp3 download
browse other artists under B:B2B3B4B5B6B7B8B9B10B11
Songwriter(s): John Rich, Kenny Alphin
Record Label(s): 2005 Warner Bros Records Inc for the U S and WEA International Inc for the world outside the U S
Official lyrics by