I was in the woods last night with my boyfriend Ernie, and he said to me "Soph",(he always called me Soph),he said to me "Soph, these woods sure are dark I sure wish I had a flash light", I said to him "so do I Ernie. You have been munching grass for the last ten minutes."

I was in bed last night with my boyfriend Ernie, and he said to me "Soph, you got no tits and a tight box". I said to him "Ernie get off my back."

From Bette Midler's Mud Will Be Flung Tonight CD

I will never forget it you know. Yet another cutting the cheese joke. Listen to how I make it my own. I will never forget it you know. It was my honeymoon with my boyfriend Ernie we were on the Silvercheif we had a car all to ourselves when suddenly I cut the cheese. Ernie said "Oh my God, Soph is that you", "did you just fart", I said of course I did you think I always smell like this." 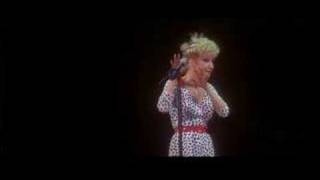