Air is frozen the leaves are dead
The moon is full, darkness enshrouds the light
Fire is ablaze, the ancient ours are here
Streams run black, the sword drips blood

Swinging in the, leafless tree in pain
Masked supremacy, rises his chalice high The congregation, falls to case

With her eyes open, her head is raised high
For all to see, celebrant drowned in red
He plunges his jaws, in neck of whore
Her swinging remains, are ripped from the tree

Brought beyond this world, drinking poisoned wine
Their ghastly shrieks echo through the forest
All in great homage, to their unholy divine. 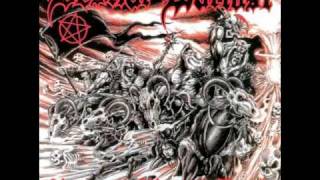