[Intro: Benny the Butcher]
In the middle of all this
Money, shows, clothes, and hoes
You know I still think about my niggas
(La música de Harry Fraud)

[Verse 1: Benny the Butcher]
Uh, you know my type, I'm official built (One hundred)
When I was nine, my momma sent me to the store to get the kids some milk
To be this clean, I had to live through filth (Shit was dirty)
Your dog'll get you peeled, for you to stand this tall, I gotta get you stilts (Nigga)
You got plans on gettin' rich? Well, consider this
The ones who expect the most favors ain't give you shit (f*ck you want?)
I was the best cook, stepped on work with my right and left foot
Before you even knеw how a connect looked
You know my pot game was tеxtbook (Text)
Who sold more dope than us except Push? The proof is how my neck look (My neck look)
I tell my bitch to get dressed up (Put that on)
But I keep the same shit on, new twenty bands and a fresh cut
Remember when I told Black to give me a mention (Free Sirius Black)
He pulled up in fifteen minutes to give me a biscuit (True story)
I thought about this rap shit and had to stick to the business
I changed my mind, he didn't, now he doin' twenty in Clinton
And that could've been me

[Chorus: Benny the Butcher]
Uh, this supposed to be success
Then why the f*ck I feel stressed out and guilty? (I feel stressed out and guilty)
Damn, 'cause I'm paid
And all my niggas in the Feds or the grave, that shit kill me (Dog, you know that shit kill me)
Uh, that could've been me
I think about it everyday, yeah, that could've been me (Real shit, they got my name too)
That could've been me (Could've been me)
I answer every call from jail 'cause that could've been me, real shit
[Verse 2: Rick Hyde]
In the cold, it get grimy out, they do you dirty for all kind of clout (Grrah)
The OGs throwin' bombs like a timin' route
I'm more comfortable with my diamonds out
This that hoodie under army fatigue jackets with the linin' out
After that one little run, you ain't been poppin' since (What happened?)
My plug guarantee me fifty, Gregg Popovich
See that could've been me, stressed out, lockin' in
My young boy gon' pull up with that fire like he's Papa Nicks (Doot, doot, doot, doot)
Yeah, that would've been me callin' collect
Tellin' my war stories to the vets Free Hottie 'til it's backwards, free Dark Lo and the rest
My hood goin' through a crisis, ain't no real niggas left (Damn)
Ain't no fathers, if you make it out your twenties, then you blessed (Amen)
That won't change your situation when your mama and them stressed
If it's sixty when it's wholesale, it's ninety with the Fent' (Whip, whip)
Grab your pot and grab your scale, it gets colder than Quebec
It could've been me

[Chorus: Benny the Butcher]
Uh, this supposed to be success
Then why the f*ck I feel stressed out and guilty? (I feel stressed out and guilty)
Damn, 'cause I'm paid
And all my niggas in the Feds or the grave, that shit kill me (Dog, you know that shit kill me)
Uh, that could've been me (Yeah)
I think about it everyday, yeah, that could've been me (That could've been me, uh, real shit, they got my name too, know what I'm sayin')
That could've been me (Could've been me, f*ck I do to deserve this?)
I answer every call from jail 'cause that could've been me (Yeah, let's go), real shit
(La música de Harry Fraud)
[Verse 3: Benny the Butcher]
I kept my foot on they necks, right where it's 'posed to be (Right where it's 'posed to be)
Over this Harry Fraud shit like the ghost of Chinx
I f*ck my bitch until she soak the sheets
I was destined to have this spot, guess at the top is where we 'posed to meet, uh (The Butcher comin', nigga)
How we playin'? Shit, you know, for keeps
At eleven hundred an ounce, they hit my house, that's when I broke the lease (I'm gone)
Y'all talk the street shit with no receipts (Hahaha)
But thank God for the coca leaf and the flow that woke the streets (Yeah)
All I'm sayin' is that was us
You let our secrets out, electric chairs'll get plugged up (Pssh)
Hit the trap and play the drug stuff, they gon' get a blood rush
I get a witness hit, f*ck it, I get a judge touched
'Cause I never love much, I just had a trunk full of trouble (Trouble)
Enough dirt for a shovel (Shovel), and three hoes I had to juggle (Hoes I had to juggle)
What you know about visitin' your family through a bubble? (Damn)
Waiting on a court date like Duffel? (Free my nigga) That's my nigga
That could've been me

[Outro: Benny the Butcher]
That could've been me
Explain lyrics
Correct lyrics 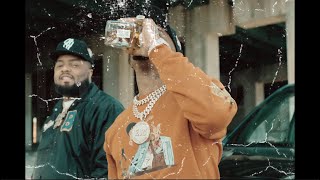