From out of his grave the drummer, when midnight's chime has tolled
Rises and wanders nightly, the drum within his hold
With arm bones white and fleshless he moves the drumsticks two
Plays many a wild reveille and many a weird tattoo

And through the dark loud calling, the drum-taps beat and shake
And the dead forgotten soldiers from out of their graves awake

Those buried in the northlands under the ice and snow
And those whose bones are swelt'ring Italia's earth below
And those who the Nile-stream cover, and the Arabian sands
All from their graves are rising with weapons in their hands

Small and cocked the hat he wears and his coat is grey and wide
And he bears a short sword hanging in the sheath at his left side
The moon with yellow glances over the wide plain shines
The general watches mutely; the troops they form in line

The marshals and the general gather around him near
A word the general whispers into Caesar's ear
The word goes round the circle, resounding over the plain
"La France!" the ringing password, the answer "St Hélène!"

Thus at the hour of midnight in the Champs Élysées
The long-dead Caesar holds his weird review, men say 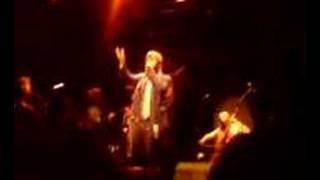