Children of technocracy invoke synthetic spirits
Plastic crosses choke perspiring necks
MAAT - I cast dices, but curtain of future is still hermetic closed
Rise! Rise up my Soror, and you, my Father -
High! Towards the stars when the white fire
Which purifies and melts all false sacrament

Lamipsos
Illumination in the face of thousand faces
Gnosis obtained by descending into the tunnels of self - knowing
When thunders of ecstasy strike black waves of unconscious sea I swim, float, drift, scream... "Aiwasss"
And barriers of self change in legion of escaping bats
L.V.X.

Lam is an "Extra-Terrestial" Intelligence with whom Aleister Crowley
entered into contact in 1919 e.v. It was during that year that Crowley
executed and exhibited the drawing of Lam in Greenwich Village, New York.
Work with Lam and other supra-human Intelligences has a its consequence
the widening and deepending of human consciousness, and the penetration
of awareness into other dimensions. Each magician who works on self-realisation
becomes both a focus of energy on earth and a projection of a star in space. 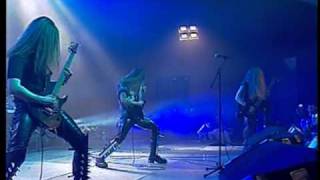