Misty skies vault of heaven
guiding to the bliss of white
The abode of the holy is soon to be broiled
by the power of an amorphous deceiver
Glittering skies weep the arrival of an end,
moon grims a sad night on the earth
Imbued from damnation, empire is at stake,
proclaimed is the Siege of Hate.

Fate in the abyss, entity's embrued
Majestic reigns hell's glory, bodies gain elude
Shades befall the blest Omnipotent's devise
Unhymned is his recantation, inglorious is his sign
Ashes goes his promised day obsequies of belief
sacred sphere beyond his grasp evil speaks no reprieve
Chosen one weeps the verging sun, nothing can be saved
Angels set to fire, this is what hell awaits.

Under the mystic signs adorned with joy
Seperial desires that pass the depths
Control the mind's dimension, the eye of dark Hades
To summit damned spirits, centurians head the war
And guard three realms for Satan, to raise the inverted
cross.

"Woe, dear heaven, Your kingdom is destroyed
...and there shall be no trinity Exult, thy Flame of
Wrath"

In uteral theophany, a heir for the Realm
Depraved unvirgin Mary her spiritual image shred
A Newborn for the Progenitor the fruit of her lust
Kataklyst's Infinity Our Kingdom Will Last 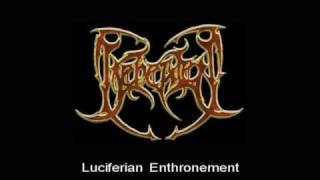 check amazon for Luciferian Enthronement mp3 download
these lyrics are submitted by kaan
browse other artists under B:B2B3B4B5B6B7B8B9B10B11