It’s not hard to see that I’m not cool.
Not too many friends when I was in school.
So I sat all alone and I learned how to rap,
And I became a smart-aleck, started talking crap.
Never really concerned with popularity
Because I was in a basement rolling 20-d
Throwing down dagger damage with my trusty 4-sider
I wrote fanfics and called myself a writer.
The only one who still thinks I’m awesome.
The only adult still yelling, “Awesome Possum!”
A couple of my friends have owned a ferret
You might have muscles but I’m not scared yet.
You might have ladies. Ok, I’ll concede
That I’d give up Coca~Cola if I could get a lady.
I don’t have low self-esteem, it’s only a word.
So stand up and be proud if your ass is a nerd.

I never listened to what my gym teacher said,
So instead I play WoW with my level 20 Undead.
I doodle all day and I can’t concentrate
So much so that my fat ass almost didn’t graduate.
For clarification I’m a nerd. Not a geek.
Geeks get good grades. I get in trouble when I speak.
Geeks get excited about a science fieldtrip.
Nerds don’t really care because my people skip. We act superior but we still watch cartoons.
Laughing our asses off yelling out, “Hesh Rules!”
With my pack of friends Saturday is Nerd Night.
Playing GURPS so long I challenge Hank to a knife fight.
Playing table top games, and CCGs (Collectable Card Games)
And then at one we take a break and head for Mickey Ds
Playing pirated movies and stolen CDs.
Internet celebrity homes, I do what I please.

I step on the dance floor but I won’t move.
All I do is bob my head when I’m feeling the groove.
Calculator in my pocket and there’s one on my wrist
I got this sexy nerd flavor that you can’t resist.
Man, don’t forget, I got this magic ring
That does +5 fire damage. That’s some powerful bling.
Out nerd me? Don’t try. I’ll tell you why
Cause I can quote every single line from Family Guy.
I got all this caffeine coursing though my veins.
Catch me on E-Bay bidding on Gene Roddenberry’s brains.
I keep telling people I’m not that Numa Numa kid.
But I’m just pissed because he did it before I did.
Mixing up white Russians cause I wanna be The Dude.
I’m not a shut in, I’m just misunderstood.
Pixilated nudes got me feeling good.
I’m a nerd mo fo. Rude, brash, and crude. 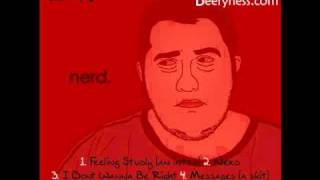 check amazon for Nerd mp3 download
these lyrics are submitted by kaan
browse other artists under B:B2B3B4B5B6B7B8B9B10B11B12