From Under The Covers Lyrics

From Under The Covers Lyrics


It's 6.00am and even Big Ben
Is trying to get his head down for a kip
But no sooner is it down
And then it's on with dressing gown
For this city very rarely loses grip
But I have a friend who's never up by 10.00
He's fast asleep with mouth open wide
He's lost a lot of jobs, but he's won a lot of friends
And he says to me, he cannot tell the time
It's 7.00am and we're coughing up the phlegm
Spitting out the taste of night before
And we'll vomit and we'll choke
Just to climb their tatty rope
Well this city has its charm, and its claw
And he'll blame his clock Or he'll say he's lost his socks
And they'll tell you that he's been bitten by a snake
His excuses are an art
>From the bottom of his heart
And he thinks of them whenenver he awakes
It's 8.00am we're on the road again
Racing for a placing at the top
And it says green for go
For the people in the know
But for the others all it says is red for stop
It's cold and its damp
And they've dug him a grave
And the 10.15 merchants still in bed
And scrawled upon the headboard
For the whole wide world to see
"Died In The Arms Of Big Ted"
Explain lyrics
Correct lyrics 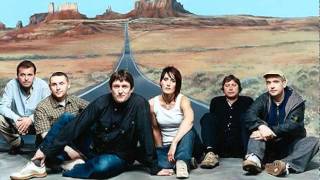