It's 4:00 a.m. I've got the Dr. Hfuhruhurr Ale
I've got nothing to lose so I'm pissin' on the third rail
Groggy eyed and fried I'm headed for the station
D-Train ride Coney Island vacation

You know you light up when the lights go down
Read the New York, Post Fulton, St. Downtown
Same faces every day but you don't know their names
Party people going placed on the D-Train

$50.00 fine for disturbing the peace
The neck tortoise the Lee's creased
Hot cup of coffee and the donuts are Dunkin
Friday night and Jamaica Queens funkin 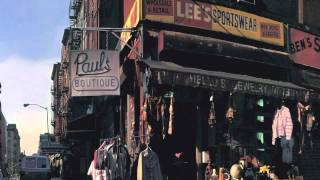