[verse 1]
I looked out the window seen his bald head
Ran to the fridge and pulled out an egg
I scoped with my scopes he had no hair
Launched that shot he was caught out there
Saw the convertible driving by
I loaded up the sling-shot, let one fly
He went for his to find he didn't have one
Put him in check, correct my egg-gun
The egg, a symbol of life
Go inside your house and bust out your wife
I pulled out the jammy he thought it was a joke
The trigger I pulled, his face the yoke
Reached in his pocket took all his cash
Left the man standing with an egg mustasche
Suckers they come a dime a dozen
"When I say dozen you know what I'm talkin
about boy"

[verse 2]
Humpty Dumpty was a big fat egg
He was playing the wall and he broke his leg
Tossed it the window three minutes hot
He hit the Rastaman and said,"Bloodclot"
What came first the chicken or the egg
I egged the chicken, and then I ate his leg
Riding the trains, in between cars when I pull
out the station
Your gonna' get your drive-by egging Plaguing L.A.,"Yo, you just got my little cousin essay."
Sometimes hard-boiled, sometimes runny
It comes from a chicken not a bunny, dummy
People laugh, it no joke my name's "Yauch"
And I'm throwing the yoke
"Now they got me in a cell," but I don't care
It was then that I got caught catching people out there

[verse 3]
We all dressed in black
We snuck up around the back
We began to attack, the eggs did crack on Jesus back
Sam I am, Down with the program
Green eggs and ham, Yosemite Sam
Come Halloween you know I come strapped
I throw it at a sucker and I'm "k-pap"
You made the mistake you judge a man by his race
You go through life with egg on your face
You woke-up in the morning, peculiar feeling
Looked up a saw egg dripping from the ceiling
The family, the punk rocks, the business man
I'll dog anybody with the egg in my hand
It's not like the crack that you put in a pipe
But the crack on your forehead here's a towel now wipe
Explain lyrics
Correct lyrics 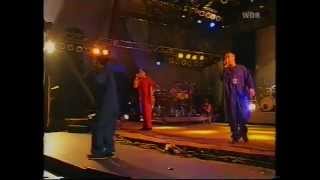