O, so it is written son
When all waters and land you see
All around came to birth
Man and beast was one
And the gods of the sky
Walked the face of the earth

Few free and innocent
Man strolled paths next to those
Of beasts seeing no signs
But stars in the sky
Knowing of day and night
Of rain and winds, hunger and fright
But not of death nor of life

While all was at ease with all
Living creatures and beast and the gods
of the sky enjoyed the lavish riches of this world,
giants rose out of their caves and took to the skies
challenging the gods for the power of the universe.
Only when the great halls of Valhalla stood aflame
lighting up the worlds all around did the gods
wake up from their drunken sleep, to speed through the heavens
and clash with the giants in the greatest battle ever seen.
Heads arms and legs of both giant and god fell down
upon the earth and... The weapons... The swords of shining metal... And those who found them and took these shining blades
in hand were only men, now man was the master of this world.

And man lived and learned
The secret of steel

Ore of earth - fire of sky
Forged is blade of gods

So the age to learn and to teach
for man begins, the power to know
the blood and iron discipline, and
tell the story of how man was granted
these shining blades of steel

Knowing of the past she will know
of the tomorrow and man shall reign, yes,
even conquer other worlds and she will set
sails on her starships sailing across the
black space and become the new gods of the skies.
The skies...
Explain lyrics
Correct lyrics 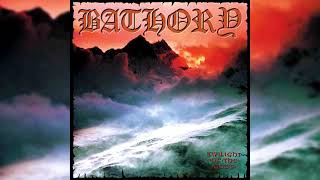