Six Score And Ten Oblations To A Malefic Avatar Lyrics

Six Score And Ten Oblations To A Malefic Avatar Lyrics

The following are excerpts from handwritten notes discovered secreted in a hidden alcove in the west wing of the Phillips-Ervin Museum, London, England. Sealed in a leather canister, the aged script was accompanied by an ornate bronze key of unknown origin. The author of the journal remains unidentified, and the artifact was only chanced upon following the museum's partial destruction during the spring of 1941...

Fragmentary entry I:
I have come into possession of a certain ancient book, a collection of arcane scrawlings reputed to have been derived from an even earlier transcription, allegedly lost during the great fire of 1666. The Chthonic Chronicles! I cannot disclose here the precise and rather unsavoury means by which I acquired this weather-worn tome, but I immediately recognized the veracity of the fevered inscriptions contained within. Apparently derived from an incomplete Latin translation of the original source material, the text sporadically lapses into an indecipherable tongue which the transcription cryptically notes as being Old High Atlantean. Glyphs, sigils, occult pictograms, six score and ten oblations to some malign entity of colossal evil...some diabolical avatar of the Z'xulth. Khthon! I must delve further into the foreboding depths of this great black book...

Fragmentary entry II:
Caught in the maleficent whorls and verticils of this dark tome... but what lies at the heart of it? A vespertine viper's nest of sublime wickedness! What I discovered within this shadow-haunted volume was a terrifying axiom so inestimably terrible in its magnitude that it would shatter all man's carefully orchestrated views of the cosmos and render utterly redundant previous theories on the origin of humankind. Lore dating from time immemorial; lore surviving in the records of long extinct civilizations, be it inscribed upon parchment now crumbled to dust, etched into the sand-whipped, glyph-scored stone of hoary temples, or committed to verbal traditions long since ingrained into some collective tribal memory. This is no globally common myth cycle, no collection of universally allegorical folk tales; it is all cold, pitiless truth!
And yet, such enlightenment has not been a prize easily won...I have communed with native shamans, consulted with misanthropic diabloists, I have confronted the martial agents, acolytes and cultists of clandestine sects who would see their knowledge safeguarded at all costs. Hildebrandt and the Quorum have treacherously attempted to have me commited to the baleful confines of Grimm's Hold Sanitarium, yet I have circumvented their insidious plot to put an end to my vaunted research. Damn their traitorous eyes! I must confer with Blackthorne upon his return from the Peruvian expedition... or mayhap Stone if ever the poor wretch regains his sanity... Stygian gramarye, etched with blasphemy,
Whorls and verticils, black with baleful spells,
Vespertine conjurings, doomsayer's prophecy,
Pellucid lotus-dreams, spawn of the elder fiends,
Cryptic halls, squamous mass, malevolent diabolist,
Black desire, nighted woe, shunned and forbidden tome,
Brooding dark, deepest night, ritual, abhorrent sight,
Whispering, malignity, hearken to the summoning!

(This black desire, this nighted woe, this vile shunned and forbidden tome,
In the brooding darkness of the night, now witness this abhorrent sight,
The whispering, malignity, now hearken to the summoning!)

Fragmentary entry III:
What titanic demi-gods once strode the boiling surface of the young earth, treading the shattered surface of mighty Pangaea beneath their ersatz feet? What fearsome entities were already inestimably ancient when mankind himself was naught but a collection of mindless random atoms, a viscous puddle of gelid protoplasm teeming with the raw materials of life, transient cells of primordial slime, all naught but malleable and tractable clay to be worked at by unimaginable sculptors, immortal star-spanning fiends! What inhuman eyes even now watch the inconsequential toilings of man from afar? The answers to these questions of denied primacy and direful cosmogony were too repulsively horrific to contemplate, and yet... I knew the truth!
And more terrifying still... The Z'xulth and their villainous agents of depravity even now walk among us!
But what price these revelations? What dire agents of malignity safeguard such cryptic axioms against the prying intellect of man? I must confesss, oftimes in the brooding darkness of the night, I have sensed their malefic gaze upon me, lurking, inexorably dogging my every step, their existence perceived only as some unnamable sense of fearful unease, and the occaisional glimpse of black shimmering against black in the depths of the teeming shadows... I hear them whispering when the mantle of darkness silences the world, and the sibilant words they utter are not for the minds of men to know. O' how I wish I had left those vile and fathomless depths of cryptical lore wholly and mercifully unplumbed! O', how I long for the assuaging balm of ignorance to once again soothe my ravaged mind! But such pleadings are, of course, ultimately in vain. I must keep my wits about me. Even now the stars align, the celestial spheres moving into the prophesied positions of the great astral conjunction. Am I to be ground to dust between the grand gears of this pitiless cosmic engine of destruction? The die is cast, the endgame nears.
Wait... they come, they come for me! Is it Hildebrandt, or something far, far worse which stalks me this night? The key... I must hide the key! 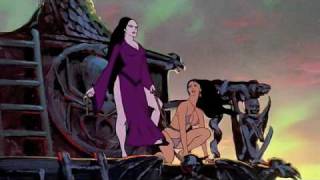