Take A Look Around Lyrics

Take A Look Around Lyrics

[E-Vocalist]
Yo, I had dreams but financially didn't have the means
Wore dirty jeans and bought hot sneaks from dopefiends
I know it's hard but three bucks [?] is real
Out here gats kill sellin crack stackin money to chill
And 57th in the summer's like a hand grenade
Taps on that ass because my block stay paid
I'm not afraid, after money's made I parlay
Uptown burk after work at the arcade
Addicted, to cash like kids to cotton candy
And had many ways to slide papes to my phalanges
Even in high school my teachers knew the half
Cause if I wasn't in class, I'm the restroom playin craps
Keepin my game on tight like menstraul cramps
Sellin twenty rocks for sixty knocks of food stamps
But now I'm on the up, no time to live foul
Concentrate on stayin straight, cause now I got a child
All the while, King Tech, put it in effect
Engineered it all the ears and produced by Fredwreck
for a sec, use your mind to process the data
My sound hits hard like a real Oakland Raider
Never been a playa hater or a Phi Kappa Beta
But if you, front on me now E-Vo' attack that ass later
Until my dyin day I make papes and parlay
I've traveled around the world but make my home in the Bay..

[Chorus: x2]
I know you know where I'm comin from brother
You got to learn about yourself before you love another Don't be afraid of what hides in the shadows
[Jeru] ("Leave your 9's at home and bring your skills to the battle")

[D-Wyze]
Well the kid be alright, my crews get you fived and live right
I'm ill, so watch the bad boy spill the phil's
What is it? Mad verbal off the fifty-fifth hill
So check the word life, because it's real
I was raised on this Eastside, the poor side of hell
Where all the crackfiends all dwell
Where the brothers sell knocks of twenty knocks on all spots
And get hemmed by track star Oakland [?] cops
I ran with a wild pack
Hard like Yukon trucks, with straps like backpacks
Stackin cash for the fun
I was nasty with my knucks cause I was taught when I was young
But shit, it's ninety-four ain't no fightin no more
I see blood all over the walls and niggaz on the floor
I'm mad dog - I'm tryin to make a leap like a frog
I wanted to do some new shit, write rhymes become a hit
I started off at CMT but that's another story G
A misconception of words, I had to cross to All City
Word life, now D-Wyze is stakin on the wife
I work hard for what I've gotten but I'm, still a little trife
Despite, the dope and violence, I love what I've done
Now stick my, dick in your eye so you can see where I'm cumin from
It's hard Oak, motherf*ckin Cali
One time to stay alive, puffin blunts in the alleys
It's one world 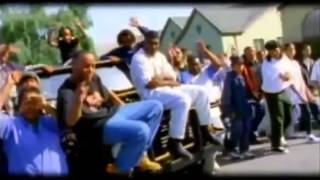