[Mac]
Feel the pain of a soulja, a 3rd ward Soulja always known
2 pack a heater, got a army bout the size of leader
We hit em
Rugged even if it's unplugged for thug lifers
We be the niggas leavin' slugs in ya crime lives
Got the town locked with underground stock
Around the clock workers to serve us
Responsible for many murders
I left your town with all the gold pieces
Shoot the police to assure my cousin's penatantry release
Payin' witnesses to hold they breath,
Don't pay when it's only death, and no this ain't a Tec
I'm in a limo full of blow niggas
But I'm always high 'cause a leader gotta be up on his toes nigga
A trail of cops is followin' when the girls be swallowin' the evidentials
Keep supplier's name confidential
Crooked cops started buckin' at us
Made a turn to a dead end, but froze 'cause the cops had us
I grab the Tec and started buckin' back
'cause I'd rather take half the force out before they cop a squat Dee Money
& B.G. The Heart Of Tha Streetz

[B.G.]
Came in the clear, slide it in, cock it back
Plot it out, I put me an extra one in
That's eighteen in tha 9, I'm ready to discharge
That's eighteen for that ass, tryin' to play hard
Got the fat bullets, with the dent in the front
They get sent when you duck when I hear from the blunt
Nigga don't let me get that first draw, and I'ma toast ya
I'ma shoot'cha in the jaw first, then get some more
You know I bust heads, gotta jack it like a brand new car
I got the bulldog sendin' niggas to the mall
I send death threats, and then I fulfill em
Two hoes think they'll survive trial bein' a witness but I'ma kill'em
My nine milli is the nigga on side of me
Hollow points is for devils that wanna follow me
Try to swallow me under Providence Memorial Park,
I'm too smart to be caught, I'ma snort what I just bought
Take a ride
With the chopper lookin' for the robber on the other side
I'm so high, and the motto Uptown is do or die
Let's make it happen, think of an action
f*ck rappin' I'm cappin', f*ck yappin', gimme no dappin'
Pull out the strapin' and start bustin',
Show me you bout buckin' or duckin'
'cause I'm sendin' 17 slugs I'm a thug
All about sellin' drugs, nigga you get plugged Get out tha way, start the race, it's a big paper chase
You get the taste of the chopper strikin' you in the face
Get out the way on tha double, I bust ya bubble
I'm behind the trigga, so niggas in trouble

[Mac]
Black T Blue Girbauds, on the grind my grandma called me Mack
But my Macanifient
I never thought the group of niggas would be behind me
They took a shot and nearly blind me
Eyes rolled back like a zombie, my life started seemin'shorter
I can't believe it, Officer Friendly, he put a slug in his daughter
I'll be a memory, but I ain't havin' it
Fightin' for my life, the people grabbin' it
Just enough strength to pull the trigga once more
I split his wig and he dropped like the twig
I heard a nigga say he wasn't dead yet
They should have never said that
My life came back, like some gangsta boy
I stood up, and took the bullets they was hittin' and looked up at the stars
Grab the glock out the holstermy pants rest of them and said niggas I'm a solja
You can't kill me
They said we'll see
I said nigga feel me, and hit em with the nine milli, ya heard me?
I took my vest off, and threw it on the sidewalk
You never see Mac, back in the city park

[B.G.]
Get out the way or get caught up in serious gun slangin'
'cause the shit that I'm bringin' leave a busta brains hangin'
'cause I ain't half steppin', when I come for the chop
I clock, meal, and rob, Black Connection is the mob
That I'm married to, TRU to life real niggas
Young niggas comin' down wit shit you could feel niggas
Peel niggas wig off, soft nigga play hard
But I see through you muthaf*cka I pull ya card
Representin' I war and die for this rap game
It's the only thing I know besides hustlin', so I do my thang
Done crossed the line wit niggas I thugged with
We run blood out'cha body, nigga we thugs, shit
So give us respect because we comin' direct
Totin' Tecs in the projects that leave a nigga wet
Baby Gangsta attacker watch my back for the jacker
Then Blacka tryin' to attack and release the ratta-tatta
Leavin' lifeless? No, never
I reverse the game in a double, I bubble
To overflow nigga, niggas in trouble 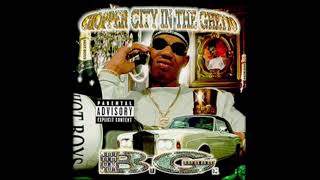