[Verse 1]
I got my AK nigga, and I'm quick to blast it
Game tight like elastic
Wit a block ??? murder jack it
Eraser, Baby Gangsta, V.L. nigga
I'm on a trail to Hell, before I go I want 6 figgas
Uptown is where you catch me doin' dirt, gun slangin
Nuts hangin, for sho, play me short and I'm bangin
I ain't no ho, my heart don't pump water, it pump liquor
Watch your step, I'll hit ya, I promise I'll split ya
Click-Clack, everything I pack got hollow slugs
I'm the definition of a thug
My whole click sellin drugs
Ain't no love, if ya outside the CMB
We risin, drivin Lexus and big body
Got them whole thangs for ten a key, niggas think we tellin tales
But on the real, we got whole thangs for half a sell
F.B.I. tryin to nail, but our click covered up smooth
Whatever you do, or how you do, it's all on you
Hot Boy, 16, playin wit G's
This rap game is the life, nigga ya wouldn't believe
What I go through and what I see, it's amazin
On the slick, thirty six ounces, top twenty, I'm calculatin
Hoes catchin masturbation, shit's a trip
But I'm bout moola, fetti, cheese, green, my grip
Nigga don't slip, cause i got 10 clips and I flip for it
Nigga believe I'll rip a nigga shit for it

[Chorus]
In my city it's a struggle, you hustle to live large
But you step or get stepped on, times is hard
Shit get real, head get bust, blood spill
It's bout havin thangs, that's why I want a mill (2x)

[Verse 2]
Nigga don't you trip cause I done came up on a lick
And I'm servin thirty gram ounces for six
I got the block sewed up now, come to me
I'll take ya to B., he went down to ten a key
We got coke floatin through that U.P.T.
Glock totin, locin, in the GS3 bubble
In the Lexus 450 Cruiser, block bruiser, nigga don't let the age fool ya
Head bussa, Hot Boy, young baller
The AK I pack is used for manslaughter
My mind is to be respected, or ya neck come off Cause Uptown, there's no hesitation to set it off
Load it up, release safety, and bust
Retaliation is a must, I don't give a f*ck
I'm checkmatin niggas, that's on the real, so wuz happenin
I'm full of that dope, scratchin, and I'm bout that action
Is you bout that action, if not, clear a path
I'm mad, I jacked a nigga and an ounce is all he had
That's sad, you stun'n, jepardisin ya wig
Doin' that petty hustlin, ain't comin up on shit
What's the reason, bein on the block all day
You ain't got nowhere to lay, that nickel and dime pay
You'll do better grabbin a K., bein ready to spray
Make a muthaf*cka day, nigga be ready to spray

[Verse 3]
Spark the beef up like a lighter, i'm a gangsta rap writer
Everytime I spit, I get tighter and tighter
Keep it real when I flow, hollow points I throw
Quick to chop a nigga down like a f*ckin lawnmow
Playin a flow over the limit, in this music business
Come wit shit, ya gotta listen, til the f*ckin song finished
Young menace, sport girbauds and reebok tennis
Nigga know if I got beef, I spin a bin, spinnin
Can't calm me down, cause I'm from Uptown
Call me, it's war wit an army, wit tommy guns
Wit drums, a hundred plus shots comin from 'em
I don't give a f*ck, if I did 'em, then I done 'em
Take notes, bitches always try to be close
Silent when you got money, but naughty when ya broke
Bustas wanna be ya boys when they know ya got coke
I stand alone all the time, bitch niggas catch a poke
I hustle hard for what I want, if I don't then I'm a broke nigga
Wit no money on my block then you a joke nigga
I rap now, I put aside that coke nigga
But if I gotta, I grab my ducht tape and my rope nigga 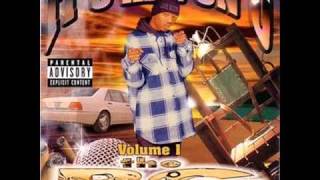