In The Air Lyrics

In The Air Lyrics


[Verse 1: Azealia Banks]
I'm so cold I'm dripping icicles
I go and take your man that nigga Might miss you
Spent his whole commission on my neck and ear
To stand around me need to have ya winter gear
Pay me coats and benz's and that berg-ice
That's why I do not feel these bitches, Frostbite
Grown money, ever since a youngin' made my own money
You broke honey, and they call me Banks, cause I can loan money
Colder than December, my diamonds on Anna Wintour
So that's fly ice in my life
I don't see no limits so I strive and I shine twice
I ride around and get it, just listen for a minute
That was only one thought let me finish...
Competition Imma beat 'em so relentless
Ima be legendary when I end this
They rise when I arrive in this
"All Hail The Supreme Ice Princess!"
Tell the carriage, hurry up and come and get me
Tell the haters run along you can miss me
Hollywood you can go and A-list me..
I like a shot of hard whiskey..

[Verse 2: Azealia Banks] Her motives is frozen
Giving chill pill to them polars
Corrosive, the coldest, city is a tundra
Stay focused, No wonder, - Frigid princess come from
Cold cash and them ice chunks, Stone frost in my Celine pumps
Rolls-Royce, snow white-ups
Colder than December, diamonds on Anna Wintour
These glaciers glamour and glisten
Antarctic, it's like a blizzard, my jargon (is)
"f*ck you i'm frigid"
Cool it down or get avalanched
Igloo'd cold-cased and bodied
And ice-cubed up in the lobby
Bitch, white fox, peep the opulence...
Ice box the coolest confidence
Isis-Queen, the Icy-Witch
Winterfresh in that whitey-Benz
Shimmering Aphrodite
Winter-wonderland body so frosty in that bugatti
Porcelain-Snowflakin' Papi, popsicle in ya pocket...
I'm polarizing ya profits
I freeze 'em, flip 'em, and rock it
Cocoa a-la mode, who's frozen from head to toe
Ice-grillin' the status quo
Cold-killer so now you know 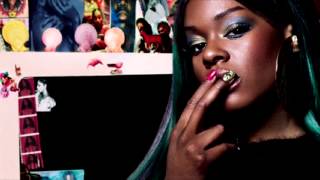 check amazon for In The Air mp3 download
these lyrics are submitted by BURKUL4
browse other artists under A:A2A3A4A5A6A7A8A9A10A11A12A13A14