Check it
I had a block locked, but took a fall now I'm off my feet
I gotta eat, so it's back to these f*ckin streets
And I will grow cause I'm an old timer
I bring the drama to any nigga, his babies or his f*ckin mama
I got a look like Tevin Campbell
But still I gamble, hustle and scramble
Cause money is muscles in this damn zoo
And in order to make it, you gotta take it
Be the boom blast booze bend or break it but don't fake it
That's why there's no guilt for these trife niggas bloods I spilt
Took what they built, flippin they drug game on tilt
Cause in New York, dealin drugs is a sport
You either sell it, smoke it, shoot up or snort
Either way you're caught
And since I'm in it, now I'm in it to win it; sky's is the limit
No more being some motherf*cker's lieutenant
Shit, from this point that's how I feel, I wanna fly
Yeah, it's either doe or die

[AZ the Visualiza]
And all hoods I hang with mix slang in they language
Love, kickin that gang shit, sellin on the same strip
Hustlin hard, no matter how much we hated
So dedicated, even our dreams are drug related
Shit, puff bananas, not even the cops can stand us
Cause of the way we vanish, everytime they come to can us
25 we get the money live - f*ck all that funny jive
The streets is our only source to survive
And before any teeny-boppers think about tryin to stop us I rather put your head, through the propellers of a helicopter
Cause all my peeps be playin for keeps
Straight out the litter, so bitter
these bandits don't even need sweets
Bringin the ruckus, like some mad motherf*ckers
Move at night like truckers
When suckers see us, they duck us
Shit, only the real can relate to things a hungry man'll, try
It's either doe or die

[AZ the Visualiza]
And ever since I was a tarface baby, watchin Scarface
I dreamed of guns and tons of coke on a car chase
A fat connect with a kingpin Colombian
Plus props from crooked cops, payin him tops not to run me in
Keepin my toaster in a shoulder holster
Havin hoes playin me closer, sexin on a silk sofa
Livin the life of the rich and trife
Rugged but sharp like a kitchen knife
Without stress from some bitchin wife
What a life, that's why I be on what I be on
Always ready to war for a score that's sure to put me on
And until then, I won't seal in what I'm feelin
It was inside that I cried, but now its spillin
I'm goin all out, until I fallout; so much of a menace
when I finish milkin New York I'll have to fall out
On the run, cause I know feds'll try to knock me
and railroad my soul to a hellhole if they got me
But not me, I'm goin out fightin until I fry
From hot lead no lie, like I said it's either doe or die

[AZ the Visualiza]
If not why not
Either you're in it, or your in the way Baby Pah
New yields, no quills
I want it all.. 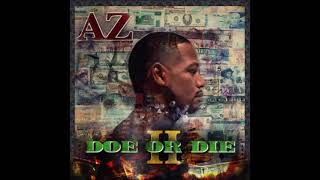