Speak Up
Avogadro
Speak Up video

Why speak up, u got nothing to tell me
Flows keep blazing, we fire like hell be
We (r) bringing u that stuff that u fiend for
Strictly real shit is the reason we here (r) for

I remember back in the days when hip-hop was raw/ in the streets of Rotterdam headz fiending for more/ spittin' bars on tape with Blood-spill, Politix/ Zarathustra & D, who wanna stop this? / Code Red in the mix, 010 gets sensational/ I'm bringing that back, my song is like inspirational/ poem, outsiders be a stepping-stone/ on the path to success, if they try to compete/ like a skeleton missing a bone, they r incomplete/ if u still envy, then I aim it at ya dome,I either elevate ya mind or I be obnoxious/ then I knock u unconscious/ Avogadro & conceptz, y'all ready know: touching one of us is risky/ I rocked shows from 010 to Helsinki/ get the message in my songs whether u burn ém or cop ém/ u ain't part of the solution, u r just part of the problem. Chorus 2x

Conceptz:
Unexplainable hunger got a story to tell/ it's like I'm out of character I'm under a spell/ get brave and test me I swing like jet li/ conceptz the ruggidnesss the realest m.c. / once I'm in my zone you best to leave me alone/ battling my ego we go straight off the dome/ songs with methaphors promise to keep it raw/ keep bringing things that you never have heard before.

Avogadro:
They brag & brawl but never do shit/ we rap & crawl ''cause we ain’t stupid/ even the government got us under surveillance/ this is ain’t a collabo, it's like when big forces form alliance/we drop heavy/ homie u better get ready/ my team gets stronger/ From Rotterdam to Paris, connection gets longer/ my homie Sebmaestria on the beat/this is nothing but an anthem for the streets. 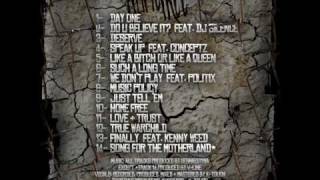