Under a sky of a million of moons
Mortals watch the coming end
A prophecy made long time ago
By the eternal nothingness...

Chaos returned under the mastery of Ancient Lords
The night feels like eternity again Everything... the ancient Kingdom
Like written in the neverending Books

Darkness rises eternally before the dawn
The stars know their meaning in the
Endlessness of Time
So let it be, eternally...

Under a sky of a million of moon.
Mortals watch the coming end
A prophecy made longtime ago
By the eternal nothingness...
Explain lyrics
Correct lyrics 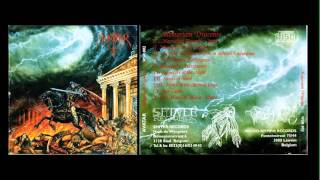 check amazon for The Eternal Nothingness mp3 download
browse other artists under A:A2A3A4A5A6A7A8A9A10A11A12A13