In the wind of the mind rises the Turbulence called I
It breaks down, showers the barren thought
All life is shocked, this desert is the abyss
Wherein is the Universe
The stars are but thistles in that waste
yet this desert is but one spot accursed in the world of bliss
Now and again travellers cross the desert
They come from the Great Sea, and to the Great Sea they Go
One by one they walked into the Land beyond the Stars,
Following the secret Pathways into Creation unknown Guided by the forbidden Grimoires of Necromancy
They heard the Call of Cthulthu, loudly roaming in the Sky,
nonesome trembling from below
Spectres arose before them,
terrible Offsprings looked at them with their darksome eyes of Death
Only the pure shall pass...
May He who Tresspasses the void within
and masters the Spellcraft of the Necronomicon
descend into the Netherworld in all his Glory...
Explain lyrics
Correct lyrics 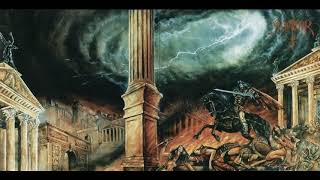 check amazon for Seduced By Necromancy mp3 download
browse other artists under A:A2A3A4A5A6A7A8A9A10A11A12A13A14